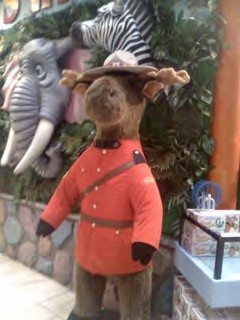 Once when ﬂying back to the U.S. from Cana­da I met up with some zeal­ous bor­der con­trol agents. The cus­toms guy want­ed a detailed descrip­tion of what I’d pur­chased.

“I bought one of those sou­venir snow globes with a lit­tle Moun­tie inside,” I said.

The guy thought a moment and then sad­ly shook his head. “Ma’am, if you’d played your cards right,  you could have tak­en home the real thing.”

The immi­gra­tion guy looked me up and down and then barked out, “What’s ‘Oshkosh?”’

“It’s either a small town in Wis­con­sin or a kind of over­alls,” I said. I was hop­ing for a gold star, but instead he rolled his eyes and waved me through.

Years lat­er I was telling a friend trained in secu­ri­ty about this sto­ry. “Would he real­ly have kept me from cross­ing the bor­der if I had answered the Oshkosh ques­tion wrong?” I asked.

Fic­tion writ­ers are also heav­i­ly vest­ed in the kind of truth that lies under­neath the sur­face answer.

Explain to your stu­dents that it’s okay to leave out some details, add oth­ers, change a few more, if it’s done with the goal of point­ing the read­er towards the emo­tion­al truth of the sto­ry. This isn’t cross­ing the bor­der from “telling the truth” over to “lying.” It’s mak­ing impor­tant writ­ing choic­es.