Lucille Clifton: All About Love

Poet Lucille Clifton in a 1998 inter­view “Doing What You Will Do,” pub­lished in Sleep­ing with One Eye Open: Women Writ­ers and the Art of Sur­vival, said, “I think the oral tra­di­tion is the one which is most inter­est­ing to me and the voice in which I like to speak.” Asked about the most impor­tant aspect of her craft, she answered, “For me, sound … sound, the music of a poem, the feel­ing are most impor­tant. I can feel what I can hear.”

Clifton was a poet, but as any writer or read­er or hear­er of pic­ture books knows, pic­ture books and poet­ry are kin. Both are meant to be read out loud, savored by the ear and by the tongue.  Both depend on sound, on image, on emo­tion. Every word mat­ters in a poem and in a pic­ture book. So is it any won­der that Lucille Clifton, amaz­ing poet, was also a con­sum­mate pic­ture book writer? 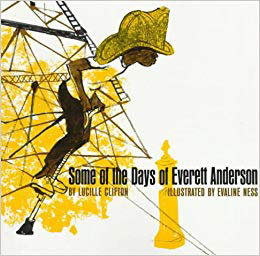 Clifton’s sto­ries hon­or both the every­day lives and also the emo­tion­al lives of chil­dren. Eight of her pic­ture books are about Everett Ander­son, a fic­tion­al African-Amer­i­can boy with a sin­gle moth­er who lives in a city apart­ment, a boy so real to read­ers that chil­dren wrote him let­ters. Some of the Days of Everett Ander­son intro­duces us to Everett Ander­son and takes us through his week, with themes of miss­ing dad­dy, of mama need­ing to work, of a boy who real­izes being afraid of the dark would mean being afraid of the peo­ple he loves and even afraid of himself. 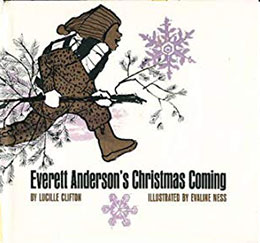 Everett Anderson’s Christ­mas Com­ing joy­ful­ly cel­e­brates a city Christ­mas through the days of expec­ta­tion and excite­ment for a boy who lives “In 14A  … between the snow that falls on down­er lives.” He thinks about what he would want if his Dad­dy was here, and how he should try hard­er to be good, and how boys with lots of presents have to spend the whole Christ­mas day open­ing them and nev­er have fun. When a tree blooms with col­or in his apart­ment, and Everett, we see from the art, gets a drum for Christ­mas, Everett Ander­son sees how “our Christ­mas bounces off the sky and shines on all the down­er ones.” 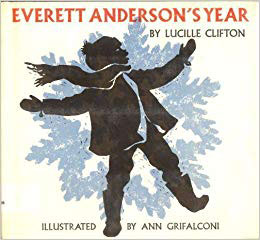 Everett’s Anderson’s Year takes Everett Ander­son from Jan­u­ary when his Mama tells him to walk tall in the world through the months and events of Everett’s Anderson’s year: wait­ing for Mama to come home from work, want­i­ng to make Amer­i­ca a birth­day cake except the sug­ar is almost gone and he will have to wait until pay­day to buy more, miss­ing his Dad­dy wher­ev­er he is, not under­stand­ing why he has to go back to school again, and real­iz­ing, at the end of the year

“It’s just about love,”
his Mama smiles.
“It’s all about Love and
you know about that.” 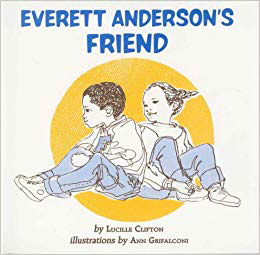 With Everett Anderson’s Friend his world expands. A new neigh­bor in 13A turns out to be a girl who can out­run and out­play Everett at ball, and he isn’t inter­est­ed in being friends. Then one day he locks him­self out of his apart­ment, and Maria invites him in to 13A where her moth­er “makes lit­tle pies called Tacos, calls lit­tle boys Mucha­chos, and likes to thank the Dios.” Everett real­izes he and Maria can be friends even if she wins at ball. “And the friends we find are full of sur­pris­es Everett Ander­son real­izes.” A sub­tle thread through­out the sto­ry is Everett Ander­son miss­ing his father, who if he were there when Everett locks him­self out, would make peanut but­ter and jel­ly for him and not be mad at all. We don’t know where Everett’s dad­dy is, but we feel his yearn­ing for his father even as Everett dis­cov­ers a new friend. 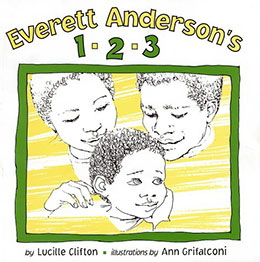 His world expands again in Everett Anderson’s 1−2−3 when Everett Anderson’s mama and a new neigh­bor, Mr. Per­ry, hit it off. One can be fun, Everett thinks, but one can be lone­ly if Mama is busy talk­ing with the new neigh­bor. Everett likes just the two of them, he and Mama. Mama tells Everett that while she miss­es his dad­dy two can be lone­ly – and things do go on. Everett thinks he can get used to being three, but the sto­ry refus­es a pat solution.

One can be lone­ly and One can be fun, and
Two can be awful or per­fect for some, and
Three can be crowd­ed or can be just right or
Even too many, you have to decide.
Mr. Per­ry and Everett Ander­son too
Know the num­ber you need
Is the num­ber for you. 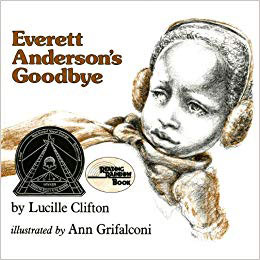 In Everett Anderson’s Good­bye we learn that Everett’s father has died. The spare and ten­der sto­ry takes Everett through the five stages of grief list­ed at the begin­ning of the book:  denial, anger, bar­gain­ing, depres­sion and, after a while, accep­tance. In the begin­ning Everett Ander­son holds his mama’s hand and dreams of “just Dad­dy, Dad­dy for­ev­er and ever.” An angry Everett declares he doesn’t love any­body, or any­thing, and a bar­gain­ing Everett promis­es to learn his nine times nine and nev­er sleep late or gob­ble his bread if Dad­dy can be alive again. Everett can’t even sleep because “the hurt is too deep.” After some time pass­es Everett comes to accep­tance of his daddy’s death and says, “I knew my dad­dy loved me through and through, and what­ev­er hap­pens when peo­ple die, love doesn’t stop, and nei­ther will I.” 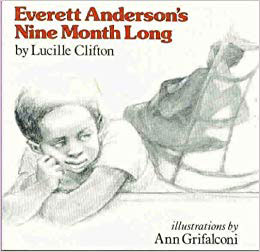 The library’s copy of Everett Anderson’s Nine Month Long has a splen­did sur­prise on the title page: Lucille Clifton’s sig­na­ture and the inscrip­tion, For Ian — Joy! 2⁄81. The sto­ry tells about Everett deal­ing with a com­ing new baby in the fam­i­ly and ten­der­ly shows his feel­ings, from antic­i­pa­tion to feel­ing left out. Mr. Per­ry, who is now Everett’s step­fa­ther, helps Everett know that his mama

… is still the same
Mama who loves you what­ev­er her name
and what­ev­er oth­er sis­ter or brother
you know you are her
spe­cial one,
her first­born Everett Anderson.

Over the course of these sto­ries Everett Ander­son grows in empa­thy and under­stand­ing. In the last book One of the Prob­lems of Everett Ander­son he wor­ries  about what to do when a friend shows up every day “with a scar or a bruise or a mark on his leg” and has the “sad­dest sad­dest face like he was lost in the loneli­est place.”  When Everett tells Mama he doesn’t know how to help his friend Greg, she lis­tens and hugs him hard and holds his hand.

and Everett tries to understand
that one of the things he can do right now
is lis­ten to Greg and hug and hold
his friend, and now that Mama is told,
some­thing will hap­pen for Greg that is new.

Some­times the lit­tle things that you do
make a difference.
Everett Ander­son hopes that’s true.

Clifton’s sto­ries rec­og­nize that not all prob­lems are eas­i­ly solved, but in the del­i­cate strength of this telling, Everett learns that doing lit­tle things might make a dif­fer­ence for his friend. We hope so, too.

From 1970 until her death in 2010 Lucille Clifton made poet­ry of every­day lives and hearts. Read some of the books of Lucille Clifton. Read them all.

They’re all about love, and we know about that.

P.S. Anoth­er month we want to share some of the oth­er won­der­ful children’s books by Lucille Clifton.

2 Responses to Lucille Clifton: All About Love