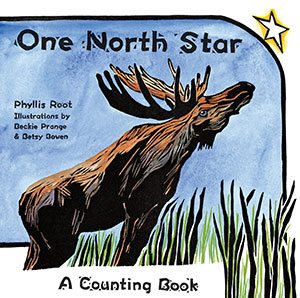 Bet­sy Bowen’s book, Antler Bear Canoe: a North­woods Alpha­bet, has been a favorite alpha­bet book for the last 25 years, remind­ing every read­er about the things they love in their unique environment.

Now, a count­ing book will sit allur­ing­ly on the book­shelf next to that title. One North Star: a Count­ing Book (Uni­ver­si­ty of Min­neso­ta Press) has been writ­ten by Phyl­lis Root, and illus­trat­ed with wood­cuts by Bet­sy Bowen and Beck­ie Prange. We’re so tak­en with the book that we asked to inter­view the inspir­ing team who cre­at­ed it. 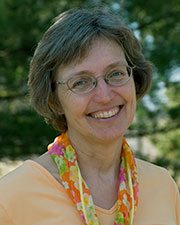 The text came first.  The book began when an editor at University of Minnesota Press was interested in a counting book, and we decided on one about the flora and fauna and habitats in Minnesota.  Ever since I moved to Minnesota years ago I’ve been fascinated with the variety of places, plants, and animals in the state along with all the still-wild places, so the book was great fun (and, as it turned out, a great challenge). When in my research I learned that the Minnesota motto is l’Etoile du nord, the star of the north, the structure of the book took shape.

This is a cumulative tale in that we count numbers, beginning at one, “one north star,” and add other north woods creatures or geology or flora until we’re counting backwards from ten. Unlike many cumulative tales (think A Partridge in a Pear Tree), the words aren’t repeated each time, except for “under one north star.” How were you able to include such a variety?

How did you go about organizing this book? Choosing which flora and fauna you would include?

First was the research. I learned so much reading about all the habitats and what you might see there and visiting places to see for myself. (I’d never been to the bog, for example, and fell in love with the Big Bog when I did visit—enough to write a book just about the bog.) Once I had an abundance of information, I began fitting the plants and animals into numbers and also into seasons so that the book followed through the year. So it made sense that in winter you’d have fewer plants and animals available, while later in summer you’d have many different ones to choose from. Also, I tried to include fish, amphibians, reptiles, birds, and mammals along with flowers, trees, and fungi. I wanted the book to be as inclusive as possible. The whole book became a puzzle to figure out. And when I had a draft I checked with a naturalist friend and found out just how much I had gotten wrong (a lot) and had to reorganize again—and again.

How did you work on your active verbs and your adjectives to get them to be so evocative of the sights, sounds, and smells of the North Woods?

I decided that, just to make the book a little more challenging (what was I thinking?) that I would try to never use a verb more than once, and I wanted each verb to be as strong and evocative as possible, to work as hard as it could so that the book would be fun to read as well.

When you were doing your research, did you discover that any of the animals or plants would not be grouped in the numbers you wrote?

Plenty of times. More times than I can count.

Were there any descriptions that the illustrators asked you to change because they would be too hard to depict?

There were descriptions I was asked to change because they were incorrect, for which I’m very grateful. I learned a lot about phenology from Beckie, what you might see at the same time in the same place, and I learned even more from my naturalist friends. I’m awestruck and delighted at how the artists solved the problem of fitting so many images on the later pages of the book. I counted up roughly 220 images depicting 55 different species in the book itself. The artwork and the artists are beyond amazing.

You have extensive back matter, divided by the type of ecosystem, such as Aspen Prairie Parkland and Bog, with descriptions of each living creature or plant you’ve included in the text of One North Star. Did you have a set of criteria so you could be  succinct with those short paragraphs?

Just trying to write sparely, something picture book writers are always struggling to do. I also tried to focus on what was the essential or most interesting feature about a place or a species, such as northern prairie skinks being able to break off their tails to escape capture.

What do you find most satisfying about adding One North Star to your deep list of books?

I love how beautiful the artists have made the book, and I’m very glad to have a book that celebrates Minnesota’s rich natural diversity. I hope the book will make folks want to go out and see these places for themselves. 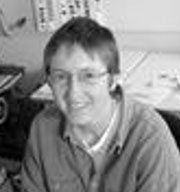 How were you asked to work on One North Star? Why did you agree?

I was approached by a former UMN Press editor and was excited about Phyllis’ concept for One North Star, and its scope.

When you work on a book like this, how much planning goes into the illustrations before you begin to make your woodcuts?

The amount of planning and research is massive. The former editor wanted the illustrations to be realistic scenes, which meant finding a way to fit all of the species into an image of what you could possibly see from a particular viewpoint in nature.

For this book, there were two of you contributing woodcut illustrations. I know that you have been teacher and student in the past. Did that help when you worked on this book together?

Due to the quirks and timing of life events I was unable to finish the illustration work on One North Star. There was a gap in the progress on the book after I had completed most of the work on the draft illustrations. By the time we could get started again, I had a full time position in a field I’m excited about and found that I was unable to continue as illustrator. I’m very thankful that Betsy was able to pick up so skillfully where I left off.

How did you work together to make the illustrations a cohesive whole?

All I can say here is that Betsy is totally awesome, and did a beautiful job with the final illustrations without any help from me.

Was it challenging to compose the chock-full, two-page spreads that included many critters? How did you make decisions about where to place everything in the illustration?

Creating single scenes from one viewpoint which included all of the organisms Phyllis wrote about, while being faithful to those organisms' habits and habitats was incredibly challenging. It was especially tough with the higher numbers, but there were challenges with lower numbers too. For example, how do you put a nocturnal creature and a diurnal creature in the same scene and have it look at least marginally believable? Little brown bats and rough-legged hawks just don’t hang out in the same space and time. I just had to play with it, and let it go until something came to me.

Have you worked on projects before with this many different objects included?

Which two-page spread in the book gives you the most satisfaction?

I love all of them, but the one that makes me happiest right now is number three, with the black bears, grouse and lynx. When I was drawing that one, I struggled with it. I could not get it to feel right. The perspective was bothering me. I never did solve it to my satisfaction. Betsy translated what is basically the same layout into an image that really works. It looks perfect.

A big thanks to all three of you for shar­ing the way you worked on this book that all who are fond of the north woods will cherish. 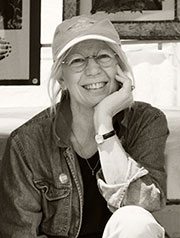 How were you asked to work on One North Star? Why did you agree?

This is my third book with Phyllis, and I really enjoy her lyrical and informative language.  I also like working with University of Minnesota Press.

When you work on a book like this, how much planning goes into the illustrations before you begin to make your woodcuts?

In this case, Beckie had made the layouts in pencil and watercolor for the number pages.  I joined the project later on, and so I used her designs. I added ideas for the parts before and after the number section. And then I made the final version of the art.  Planning and sketching is a big part of the work (and the fun!).

Was it challenging to compose the chock-full, two-page spreads that included many critters? How did you make decisions about where to place everything in the illustration?

This was Beckie’s doing, I think it must have been tricky.

Illustrators often use photographs to plan their composition or get the details right. Is it the same when you’re carving wood?

I like to look at photos to help inform the drawing, and study the way animals and plants really look.  That is if I can’t get the moose to stand still long enough … 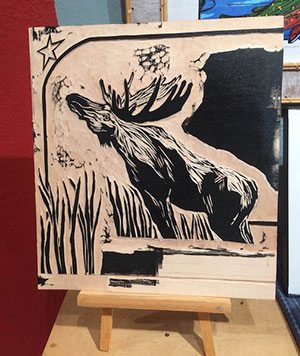 How long does it take to create a woodcut for one two-page spread?

The carving took me a few days for each spread.

Do you make mistakes? Do you have to start over with a fresh block of wood?

Most mistakes I can fix with either Elmer’s Glue® or a Band-aid®. Rarely I do start over with a new carving. I try to shake out the questions in the drawing/design phase before starting the longer process of carving and printing. It’s not very easy to just move something over  ”just a little” once the whole picture is made.

Have you worked on projects before with this many different objects included?

These were detailed pages! I think all more intricate than I have done before.

Which two-page spread in the book gives you the most satisfaction?

The Seven page, viewing from underwater, was tricky for me.  I would try to see how the light came through water while I was swimming at the local pool.  I really liked the result more than I expected.

Phyllis is the author of more than forty books, most of them picture books. She received a McKnight Fellowship for Lucia and the Light. Aunt Nancy and Old Man Trouble won a Minnesota Picture Book Award. Big Momma Makes the World won a Boston Globe-Horn Book Award. Plant a Pocket of Prairie won a John Burroughs Riverby Award. She lives in Minneapolis, Minnesota.

She is a biologist and printmaker who has illustrated two previous books, the Caldecott Honor winner Song of the Water Boatman and

Betsy has written and illustrated many children's books, including Antler, Bear, Canoe: A Northwoods Alphabet Year Helen Hoover's Great Wolf and the Good Woodsman, and Phyllis Root's Big Belching Bog and Plant a Pocket of Prairie. She lives in Grand Marais, Minnesota.