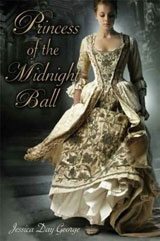 My twelve-year-old daugh­ter is inhal­ing books these days — a stack at a time out of the library, every book­shelf in the house pil­laged, major insid­er trad­ing at school, etc. There’s no way I can keep up, but when I move a book from here to there I often flip through or ask her opin­ion. When she start­ed read­ing Princess of the Mid­night Ball, I assumed, based on the PBS Mas­ter­piece The­ater-like attire on the cover’s princess, that it was “just-anoth­er-princess book.” I did­n’t even ask about it — I’m not a huge princess book fan and she reads whole series of them.

And then, while I was chop­ping veg­eta­bles for din­ner one after­noon, she looked up from the book and said, “You should read this, Mom.”

Now, she does­n’t say this about every book. She’s hap­py to tell me the plot, cri­tique the writ­ing, acknowl­edge when she’s read­ing what we some­times call M&M lit­er­a­ture (i.e., junk), and admit that a deep dark choco­late book is usu­al­ly more sat­is­fy­ing, even as the M&M books can be fun. We love to talk books togeth­er, but we only rec­om­mend the real­ly good ones to each oth­er.

“Nope.” She gig­gled and turned the page.

“Grimm Broth­ers’ Twelve Danc­ing Princess­es,” she said, not lift­ing her eyes from the page.

The name som­er­sault­ed through my brain. Why did I know that name? 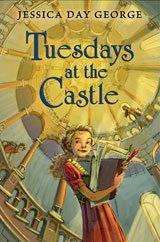 Aha! Not the usu­al princess books!

“Tell me more,” I said, and I start­ed chop­ping broc­coli.

“Well, the princess­es are all named for flow­ers — and they’re this great fam­i­ly and there’s the thing about how they’re danc­ing holes into their slip­pers every night and no one can fig­ure out what’s going on…. The guys who arrive to “save” them are such idiots.” She rolled her eyes. “But the one who’s going to save them…he knits.”

“Knits casu­al­ly or as a plot point?” I’m not sure how knit­ting can be a plot point, but I hold out hope.

“I think it’s going to be a plot point….” she said in her most beguil­ing way. Danc­ing green eyes peered at me over the top of the book’s pages.

It’s ter­rif­ic. Knit­ting is indeed a plot point. Knit­ting pat­terns are includ­ed at the end of the book, even! Jes­si­ca Day George’s web­site explains — she’s a knit­ter. And she loves men who knit.

Set in nine­teenth cen­tu­ry Europe (which explains the book cov­er — total­ly appro­pri­ate), this fresh retelling of the Twelve Danc­ing Princess­es is full of humor, inter­est­ing char­ac­ters, and fun twists and turns of plot. The princess­es are smart, cre­ative and feisty; the hero a dash­ing, sen­si­tive, knit­ting gar­den­er. (Be still my own princess heart.)

This book is a romp and delight. I did­n’t read it quite as fast as my daugh­ter, but almost. I look for­ward to the oth­er two in the series — I have it on good author­i­ty that they are equal­ly won­der­ful — and Ms. George hints on her web­site that there could be more.

3 Responses to Princess of the Midnight Ball