I’d like to know a thou­sand things about this book because you’ve opened so many doors for my imag­i­na­tion. I’ll restrict myself to only a few of those ques­tions, pri­mar­i­ly to help stu­dents who are drawn in by all the sto­ries with­in this pho­to­graph and the poems you’ve writ­ten about it. 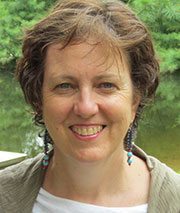 You have been a jour­nal­ist and a music crit­ic. You’re a pic­ture book writer, a biog­ra­ph­er, a non­fic­tion writer. This is your first book writ­ten in poet­ry. How did you learn about poet­ic form so that you had con­fi­dence to write this book?

I wrote a cou­ple of sort-of poems and thought they might work as a way to tell the sto­ry of the pho­to­graph “Harlem 1958.” Then I start­ed read­ing poet­ry, and I attend­ed a poet­ry retreat. Most­ly I just kept writ­ing. 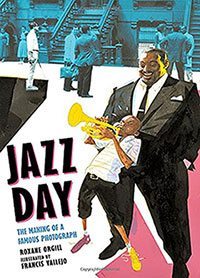 How long did it take you to write Jazz Day? Is that more or less time than it nor­mal­ly takes you to write a pic­ture book biog­ra­phy?

I’m not sure, maybe a year and a half. Less time than my pic­ture book bios, but that’s not count­ing the time I spent try­ing oth­er forms in which to tell the sto­ry. That’s always the hard part for me, fig­ur­ing out what the sto­ry is and how I want to tell it. That peri­od can last many months.

How did you find the right place to ask per­mis­sion to use Harlem 1958 in your book?

I went through the Art Kane estate.

You wrote “This Moment” in the form of a pan­toum. That form uses four-line stan­zas. The sec­ond and fourth line from one stan­za become the first and third line of the fol­low­ing stan­za. How long did it take you to get this poem just right?

Not long. It’s like a puz­zle. But I wrote that poem near the end, when I was already famil­iar with the sto­ry and the peo­ple in the pho­to.

Do you recall when you first learned about the pan­toum form?

At the poet­ry retreat, from the teacher, a poet named Lesléa New­man.

Did you end up being hap­py you’d cho­sen to write the book in poet­ry or decid­ing this is the last time you’ll do this?

Absolute­ly, yes. Poems turned out to be the per­fect way to write about this pho­to­graph, jazz, a Harlem street, the 1950s — the whole thing. 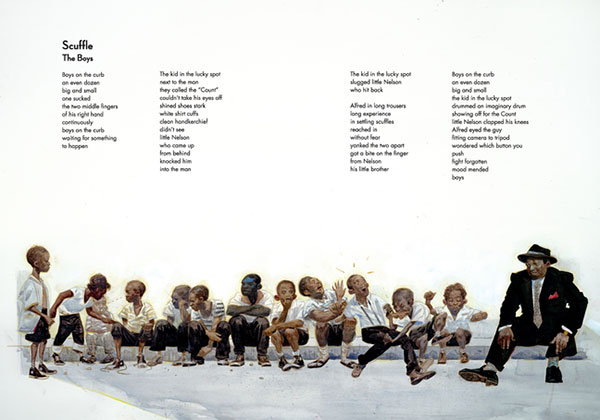 How do you decide the sub­ject of your next book?

I fol­low my nose, I guess. What inter­ests me. It doesn’t always work; I have a few books which I spent a lot of time research­ing and writ­ing, and in the end, they didn’t work. My next book is not about music or the arts, and I had to muster the courage to tack­le some­thing com­plete­ly unfa­mil­iar.

Were you drawn to this book because of your love for jazz or pho­tog­ra­phy or the 1950s? What pulled you into the project?

Jazz pulled me in, but I’d known about this par­tic­u­lar pho­to ever since I began learn­ing about jazz.

What dif­fer­ence did it make to the book that you were able to inter­view a pri­ma­ry source, the pho­tog­ra­ph­er Art Kane’s son, Jonathan Kane?

A big dif­fer­ence because there are lots of ver­sions out there of what hap­pened that day, whose idea it was to take the pho­to, etc. I basi­cal­ly used Jonathan Kane’s ver­sion of events.

You had no idea how your poems would be illus­trat­ed, how they would make that leap from sep­a­rate poems and illus­tra­tions to inte­grat­ed dou­ble-page spreads that work togeth­er to help us under­stand a time, a place, a feel­ing, a group of peo­ple. Did you find your­self alter­ing your poet­ry to allow room for the illus­tra­tor to make his own con­tri­bu­tions to the book?

No, not at all. The way it works is that I com­plete the man­u­script, revise it togeth­er with my edi­tor, and then the fin­ished text is sent to an illus­tra­tor who has been cho­sen by the art edi­tor. I may have changed a word or two to suit an illus­tra­tion or lay­out, but that’s all. I was sent sketch­es and invit­ed to com­ment, which I did, but for the most part, Fran­cis and I worked inde­pen­dent­ly. We didn’t even meet until after the book was pub­lished. That’s pret­ty much the norm.

Your list poem, for exam­ple, “What to Wear (from A to Z)” is illus­trat­ed bril­liant­ly in list fash­ion as well. Were you aware of includ­ing items in your list that could be eas­i­ly illus­trat­ed?

No, I don’t imag­ine how my words will be illus­trat­ed. I guess that’s why I am a writer, not an illus­tra­tor! 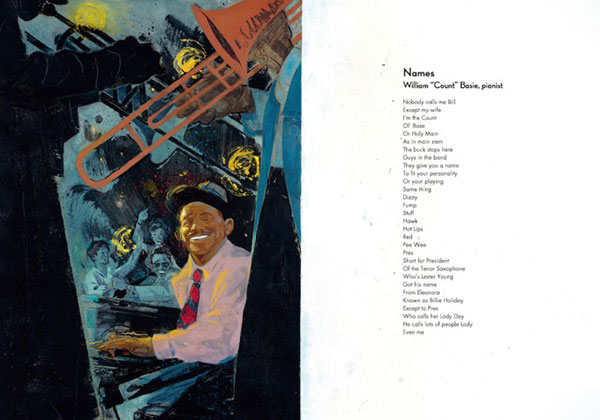 You state in the author’s note that you researched why some of the most famous jazz musi­cians aren’t in the pho­to. What drew you into doing this “extra” research? Or do you view it as extra?

It wasn’t extra, not to me. I knew many “greats” were miss­ing: Louis Arm­strong, Ella Fitzger­ald, Sarah Vaugh­an, Miles Davis, on and on. I thought it might be fun to focus on one of the miss­ing peo­ple, and maybe fig­ure out what he or she was doing instead of being at the pho­to shoot. It was also a way of talk­ing about the jazz life; most of these guys, and gals, were on the road all the time.

Rox­ane, thank you for tak­ing the time to share your insights with our read­ers. Your book has received six starred reviews from the major review jour­nals … it’s hard not to fall in love with Jazz Day.

Roxane Orgill came to writing books through journalism. She was a music critic for more than twenty years and is now the author of nonfiction books for children and adults, including her recent biographies Skit-Scat Raggedy Cat: Ella Fitzgerald (illustrated by Sean Qualls), and Footwork: The Story of Fred and Adele Astaire (illustrated by Stephane Jorisch). Her books have been named to several Best of the Year lists, including Junior Library Guild, ALA Best Books for Young Adults, and New York Public Library Books for the Teen Age. She lives in New York City. For more information please visit her website.

Cook-A-Doodle-Do!
A Bit of Noise