Such is the nar­cis­sism of youth that, sad­ly, one often learns about some impor­tant things about a par­ent only when they have passed on. Such was the case of my moth­er. Even as I began to pub­lish, she nev­er told me that she had want­ed to be a pic­ture book writer. I only learned of that when, after she died, I came upon some man­u­scripts she had writ­ten. My father told me that she had nev­er sub­mit­ted any of her work to a pub­lish­er. Too shy. 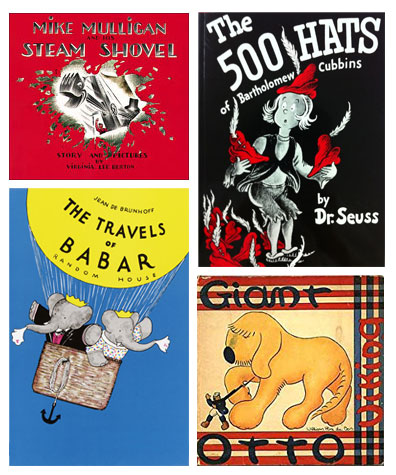 But that explained (in ret­ro­spect) her great inter­est in pic­ture books, and why, in the nine­teen for­ties (my youth) I had many of the clas­sic books of that time. Thus I have quite vivid mem­o­ries of such books as Burton’s Mike Mul­li­gan and His Steam Shov­el, Seuss’s The 500 Hats of Bartholomew Cub­bins. Oh, yes, Babar. I actu­al­ly still have an ear­ly copy of Giant Otto by William Pené du Bois. I can think of more.

I don’t know if such books influ­enced me in any way, except I know my sib­lings and I were read to every night by my moth­er. No coin­ci­dence: My twin sis­ter is also a writer.

In some fash­ion — I’m not sure how old I was — I dis­cov­ered the ani­mal sto­ries of Thorn­ton W. Burgess. These anthro­po­mor­phic sto­ries were orig­i­nal­ly seri­al­ized in news­pa­pers, and then pub­lished as book in which form I read and col­lect­ed them. (There was a used book store in my neigh­bor­hood and I could buy them for twen­ty-five cents.) I am not sure why as a city boy I loved these tales. Per­haps it was because I was a city boy.  But as the first chap­ter books I read on my own, I know that there are echoes of them in my Pop­py books.

But I have no doubt the Burgess books enabled me to move on to the more sophis­ti­cat­ed Fred­dy the Pig books, which I devoured. I draw a direct line from those titles to The Wind in the Wil­lows, which made a deep impres­sion on me. Now I was read­ing great writ­ing. From time to time, I still re-read that book. It remains utter­ly wonderful.

I also read much of what were called boy’s books, the Hardy Boys, Tom Swift, and the like.

At some point (I’m not sure when) I dis­cov­ered Robert Louis Stevenson’s Trea­sure Island. When I began to write his­tor­i­cal nov­els, that book is the inspi­ra­tion and mod­el for much of my work.

Then there was the radio. I was an avid lis­ten­er to radio plays, in par­tic­u­lar the kid’s shows, like Jack Arm­strong, and Super­man (how thrilling when Clark Kent’s alto voice changed to Superman’s bass tones), as well as The Lone Ranger.  To get a sense of how much radio influ­enced me, read my Who Was That Masked Man Any­way? It’s an homage to my radio lis­ten­ing days.

But as I began (as a high school stu­dent) to think about writ­ing, it was not nov­els that inspired me, but stage plays. I was liv­ing in New York City at a time when the the­atre scene was abun­dant and afford­able. I recall going to as many as two pro­duc­tions a day, a mat­inée and then an evening per­for­mance.  I also would go to a the­atre and wait for the first inter­mis­sion. In those days of per­va­sive cig­a­rette smok­ing, the audi­ence would drift out onto the street to smoke. I would min­gle with them and drift (like the smoke) inside, becom­ing adept at grab­bing an unused seat.

In a diary I kept dur­ing my senior high school year there are long lists of the plays I am read­ing. And some­where in 1955 there is a line in that diary, which reads: “I’ve made up my mind. I’m going into the the­atre.” What I meant was writ­ing for the theatre.

Did all this the­atre influ­ence my lat­er writ­ing? Dick Jack­son, my most impor­tant edi­tor (him­self a lover of the the­atre), once said to me (of my nov­els) “Avi, you’ve nev­er stopped writ­ing plays.”

Because of the heavy crit­i­cism I received about my writ­ing, in col­lege I avoid­ed (to the best of my abil­i­ty) Eng­lish class­es. Not that I didn’t read. I was a vora­cious read­er, but fol­lowed no pat­tern. I sim­ply read what­ev­er caught and held my atten­tion. Read­ing taught me to write.

By the same token, by not tak­ing writ­ing class­es (or hav­ing a men­tor) I nev­er devel­oped a sin­gu­lar “voice,” or style, which explains, I think why my writ­ing is so var­ied — a reflec­tion of my reading.

These days I still read a lot for both research and plea­sure. For the plea­sure read­ing, it’s not crit­i­cal read­ing, but sim­ply to be immersed. It’s still random.

How does all this add up? When I moved from my Den­ver home to my moun­tain home I had some­thing like five thou­sand books on seri­ous­ly sag­ging (home­made) shelves. For the most part I gave them away to used book stores, with the hope they would have more hands to turn the pages.

I hold many images of read­ing in my head, but one beyond all else. It is a pho­to­graph of a war-torn boy. Para­plegic. Blind. He is bend­ing over a braille book. He is read­ing the text with the tip of his tongue.

On my car is a bumper stick­er I com­posed: Bet­ter read than dead. 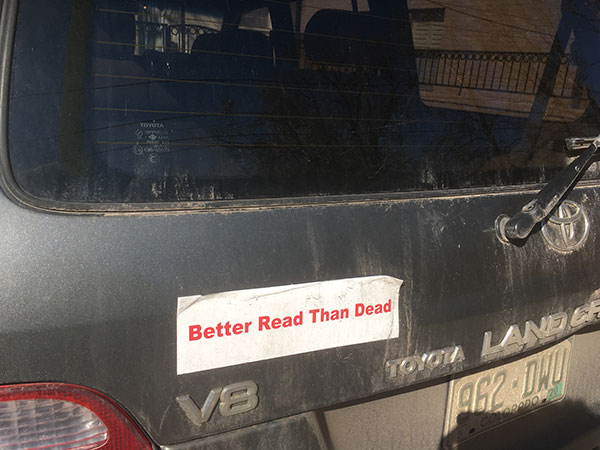 One Response to Avi