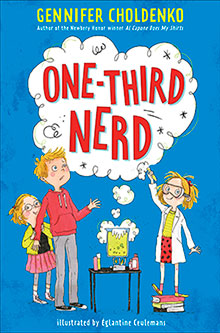 One of my favorite books of Gen­nifer Chold­enko’s is One-Third Nerd, in which a broth­er and two sis­ters attempt to solve the prob­lem of their beloved dog being incon­ti­nent in their rent­ed apart­ment, over which the land­lord threat­ens to evict them. They’ve been told a vet could fix the prob­lem, but surgery for their dog is low on their par­ents’ list of pri­or­i­ties. The kids use their imag­i­na­tive prob­lem-solv­ing skills to raise mon­ey, which sets up both hilar­i­ous and poignant scenes. It’s a book in which fam­i­ly, friends, and com­mu­ni­ty pull togeth­er to sup­port each oth­er, which makes it one of my top books for rec­om­mend­ed reading.

We’ve asked Gen­nifer Chold­enko, the author, to share some insights behind the book, know­ing you’ll find these invalu­able when you are book-talk­ing and teach­ing writ­ing in your classroom. 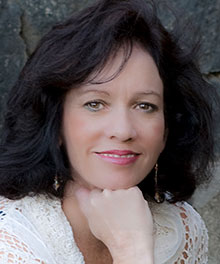 Was being funny a goal for you as a child?

It wasn’t a goal. It was a requirement. In our family humor, ribbing, and kidding was our language. It was how we showed our affection for each other. You had to know it to survive. Since I was the youngest, and odd man out, humor was my most important survival skill.

On a side note, humor is still very impor­tant to me. On my first date with the man who would become my hus­band, every­thing went bad­ly. He showed up with no mon­ey. I paid. No car. I drove. He spent the entire date talk­ing about his ex-girl­friend, who he said was bril­liant, sophis­ti­cat­ed, stun­ning­ly beau­ti­ful — per­fect in every way. He talked over the movie explain­ing the events unfold­ing as if I were too stu­pid to fol­low the plot myself. On my way to his apart­ment where I was plan­ning to dump him uncer­e­mo­ni­ous­ly on his doorstep, nev­er to see him again, I point­ed out to him just why this date had gone so bad­ly. By the time I fin­ished my litany, we were laugh­ing so hard I had to pull the car over. We’ve been hap­pi­ly mar­ried for 31 years.

So many readers ask for funny books. Many of your books, including the Al Capone series, have humorous elements. One-Third Nerd is, in my opinion, your most comedic book so far. It made me giddy to read it. Does humor flow from you naturally or do you work over your manuscript to increase the “funny”?

Some characters are funny from the get-go. The humor is generated from the friction between how they view the world and how the reader knows it to be. When a character like that pops on the page I’m thrilled. But those characters are a gift. I can’t make them appear.

Try­ing to “increase the fun­ny” has nev­er worked for me. When I have tried, the humor is forced. Instead, I look for missed oppor­tu­ni­ties. I sense a missed oppor­tu­ni­ty for humor the way I sense where exact­ly my foot needs a good scratching. 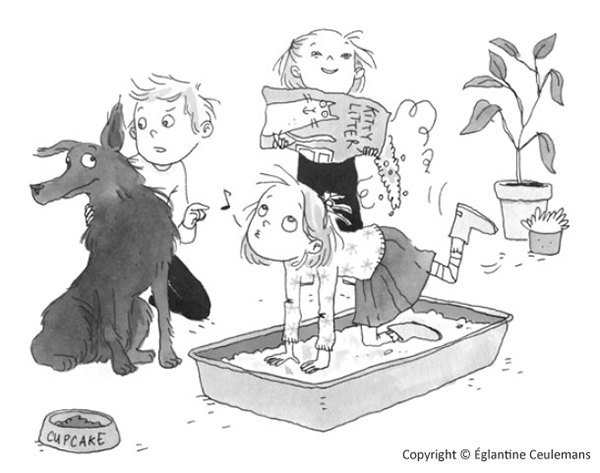 We’re often talking about a book’s characters in class or in book clubs. Can you help us see inside this aspect of creating characters that you accomplish so well?

Good char­ac­ters arrive on the page ful­ly formed. I don’t work at cre­at­ing them so much as they just show up. There are always one or two char­ac­ters that don’t pop on to the page this way. And then I have to work hard to breathe life into them. When I say: “work hard” I mean fig­ure out their secrets, what they keep in their clos­et, what’s under their bed, what they eat for lunch, who they envy, how they feel about their sib­lings, which par­ent they pre­fer, etc. The bet­ter char­ac­ters some­how sense these things intu­itive­ly. And every day I work on the man­u­script I dis­cov­er more about them. But with the hard-to-know char­ac­ters, I do the work. Then I close the file and start writ­ing about them again. Gen­er­al­ly, the things I “fig­ured out” about them aren’t right. But some­how that “fig­ur­ing out” process helps me get clos­er to who they real­ly are. Often, it is in find­ing out who these char­ac­ters aren’t, that I begin to get the first inkling about who they are. 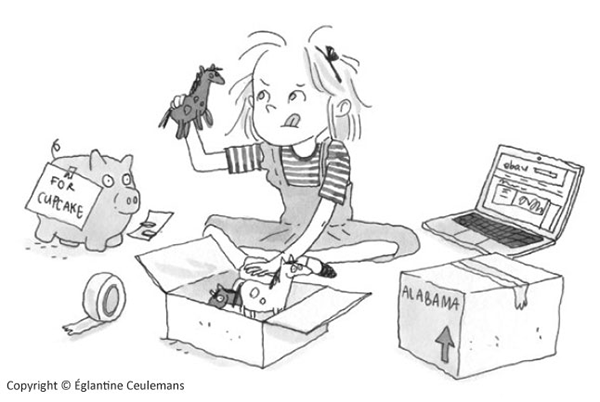 Izzy is an endearing character. She has Downs syndrome but you haven’t let that define her. We’ve already fallen in love with Izzy when we realize her big sister, Dakota, is selling Izzy’s collection of plastic horses on “eBay.” Who came first in your conception of the book, Dakota or Izzy?

Dakota came first. Then I began brainstorming the family that would be the most difficult for her to handle. Like many bright kids, Dakota assumes that everyone sees things the way she does and her way of viewing the world is the “right” way. So I thought what if . . . Dakota had a little sister who was very different from her. How would Dakota cope with that?

Liam arrived on the scene because I thought it would be fun­nier to tell the sto­ry from his point of view. I know there are a lot of books with very bright char­ac­ters who have hilar­i­ous voic­es. Lisa Yee’s won­der­ful book Mil­li­cent Min, Girl Genius comes to mind. And of course the amaz­ing Junie B. Jones books by Bar­bara Park, The Mis­cal­cu­la­tions of Light­en­ing Girl by Sta­cy McAn­ul­ty and many, many oth­ers. But I liked the idea of a boy who was extreme­ly self-con­scious telling the sto­ry about his high­ly embar­rass­ing sis­ter. When I speak to school groups about One-Third Nerd, I always ask: “Raise your hand if your sis­ter or broth­er or cousin has ever embar­rassed you?” The entire room erupts. Near­ly every child has a sto­ry they can’t wait to tell me about some­thing incred­i­bly embar­rass­ing a sib­ling or cousin has done.

When you began writing this book, did you know roughly how many characters there would be? Or do you add them as needed?

I never know how many characters I’ll need. My tendency is to have too many. In revision, I often find I have to cut out a few, so I don’t overwhelm the book.

Did you have to cut any parts of the story that you wish you could have kept?

No, but I have written a few chapters of a sequel. Would you like to see the first chapter?

Do you have a favorite character among your troupe?

I love them all of course. But I’m partial to Izzy because she tries so hard. I ‘m a person who tries really hard—some would say too hard—at things that matter to me. So, I have a soft spot for kids who put forth huge effort to do things that are effortless for many other kids. Then, too, I really admire the way Izzy is able to build relationships. So, yes, I am absolutely smitten by Izzy. 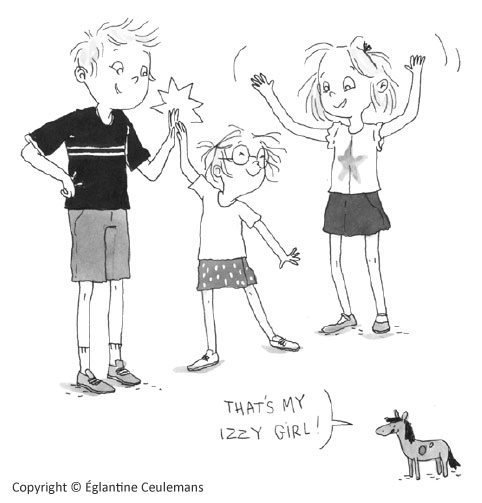 Did any of your characters surprise you?

With luck, they all surprise me. If my characters don’t begin behaving in ways I don’t expect, then they aren’t good characters.

Of your main and minor characters in this book, whose voice was hardest for you to write?

Mom’s voice. I had a hard time figuring out who she was. I knew I liked her and I felt like I understood her on a superficial level, but it was difficult to get inside her in a deeper way. I sometimes have trouble with adults, because generally they aren’t as interesting to me as kids are. There are exceptions, of course. I absolutely adored writing Jabo in my novel Orphan Eleven due out in May 2020.

I also strug­gled with the dog, Cup­cake. I think that’s because she was too much like my own dog the much adored Sasha. I don’t do well writ­ing about char­ac­ters who are too much like real beings. I doubt I will ever write a mem­oir. I like to cre­ate more than I like to describe.

I think you’ve written believable and essential adult characters for this story. Although the parents are divorced, they’re both very much present in their children’s lives. Was it a conscious decision to let adults be a vital part of this story?

Even the most child-friendly divorce is still really, really hard for kids. Relationships change as a function of the new situation. Homes often change. Sometimes schools and friends. Routines are upended. Weekends and holidays change completely. And there is a rejiggering of the relationships a kid has with each of her parents. Ideally, when a kid turns nine or ten or eleven parents begin to fade into the background, because a kid is beginning to step out on her own. But when a divorce happens the process of becoming more independent is temporarily halted until a child establishes new relationships with her now separate parents. So yes parents become front and center in a child’s life, until the divorce settles. This is a long answer for why the Rose parents are an important part of this book. And of course these are my opinions. I’m not a therapist.

Gen­nifer, thank you for shar­ing a behind-the-cur­tain look at the skills you apply to every book you write. Read­ers, both chil­dren and adults, are lucky to encounter the sto­ries you tell.

2 Responses to Writing a Funny Book