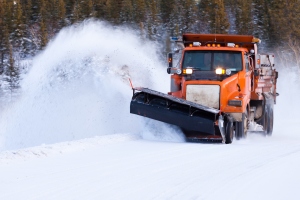 When­ev­er we get a large snow­fall in Min­neso­ta, I’m remind­ed of the time I was saved by a snow angel. We were being whomped with a mas­sive bliz­zard and I was sched­uled to work at a book­store until 11:00 p.m. By the time the boss said it was okay for me to leave, it was too late: my car got com­plete­ly stuck in the mid­dle of a city street. I was miles from home, it was well after dark, freez­ing­ly cold, and I was cov­ered in snow up to the hem of my skirt. There wasn’t a per­son or a lit house in sight; every­one else was nes­tled snug­ly in their beds.

Those were pre-cell phone times. Know­ing that if I left my car in the mid­dle of the street it would become snow­plow road kill — some­thing my book­store salary couldn’t aﬀord — I was using the rarely-eﬀec­tive prob­lem-solv­ing method of “wring­ing my hands and moan­ing” when a ﬁgure appeared out of nowhere. One moment nobody was there, and the next a guy was set­ting a can of beer down on my snow-cov­ered hood and shov­el­ing out my wheels. He didn’t say a word. Once he had the under­side of the car cleared, he motioned me into the front seat, and with him push­ing, we man­aged to get my vehi­cle out of harm’s way to the side of the road. He waved oﬀ my oﬀer of pay­ment and dis­ap­peared into the storm (with his pre­sum­ably now ice-cold beer in hand). I remem­bered that a friend of mine lived only a cou­ple of blocks away, and I showed up unan­nounced on her doorstep at mid­night to be wel­comed with hot cocoa, dry clothes, and a pull-out sofa.

That episode is one of the times, for me, when the idea of a big­ger force at work in my life seems not only pos­si­ble, but prob­a­ble. Both at the time and in my mem­o­ry, my snow angel feels like a ﬁgure from far out­side of every­day real­i­ty: pop­ping up between snowﬂakes just in time to deal with my cri­sis, and then van­ish­ing silent­ly and com­plete­ly. Besides, it’s some­how fit­ting that any angel of mine would be chug­ging beer out of a can rather than a head­ier celes­tial brew.

Some young writ­ers (like some pro­fes­sion­als) real­ly strug­gle with writ­ing at times, and my expe­ri­ence is that it’s impor­tant to tell them that this is a per­fect­ly nor­mal part of the cre­ative act. Wran­gling words onto paper requires us to face down chal­lenges. The trick is to con­tin­ue to push your­self out into the cre­ative storm, into the places where your writ­ing will get stuck — because where you get stuck is also the place you can grow. Or at least, the place where you can learn to accept miracles.

Writ­ing well is hard. If you’re not chal­leng­ing your­self as a writer, you can turn into writ­ing road kill. Besides: angels need a rea­son to show up.