Which celebri­ty, liv­ing or not, do you wish would invite you to a cof­fee shop? 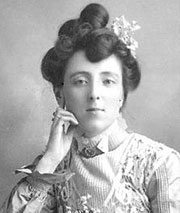 Author L.M. Mont­gomery, of Anne of Green Gables fame. I’ve read all of her books sev­er­al times over, includ­ing the jour­nals she kept from four­teen until the time of her death. In fact, I’ve com­mit­ted to revis­it­ing Maud’s jour­nals every ten years. So far, I’ve read all five vol­umes twice.

Though I have a feel­ing Maud wouldn’t approve of me (she was not fond of free verse), she has always felt like a kin­dred spir­it. Like me, she was a teacher, a Pres­by­ter­ian pastor’s wife, a moth­er to two boys, and an author. I’d like to think we’d have a lot to talk about!

Lat­er this year my best friend and I are head­ing to Maud’s home, Prince Edward Island — a trip six years in the mak­ing and dream come true.

I adore Nor­ton Juster’s The Phan­tom Toll­booth. I’ve prob­a­bly read it thir­ty times, first as a stu­dent, then as a stu­dent teacher, then with my stu­dents, and final­ly with my own chil­dren. It’s wit­ty, it’s clever, it’s fun, and oh so quotable. It’s also great for teach­ing ele­ments of sto­ry. There’s a reluc­tant hero on a clas­sic quest, and even the cli­max takes place at the high­est phys­i­cal point in the sto­ry — the Cas­tle in the Air. 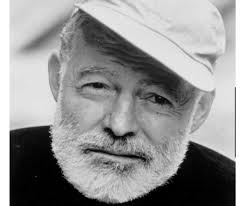 I’m going to change this one slight­ly to my most star­ry-eyed lit­er­ary child­hood mem­o­ry. My fam­i­ly host­ed a Span­ish exchange stu­dent named Paula when I was in fourth grade. Since then, Paula’s fam­i­ly and my fam­i­ly have con­tin­ued to remain close. The Maci­ciors own a home that is hun­dreds of years old, a grand thir­ty-four room struc­ture in the Span­ish coun­try­side, near the city of Pam­plona. In the 1920s Ernest Hem­ing­way rent­ed a room there while work­ing on The Sun Also Ris­es.

I vis­it­ed this house as a pre-teen and a teen. Though I hadn’t yet read any­thing by Hem­ing­way, I knew his name and was thrilled to learn I’d get to stay in the room where a real-live author had tem­porar­i­ly lived. There are two beds in the room, and you bet­ter believe I slept in both, to cov­er my claim-to-fame bases. 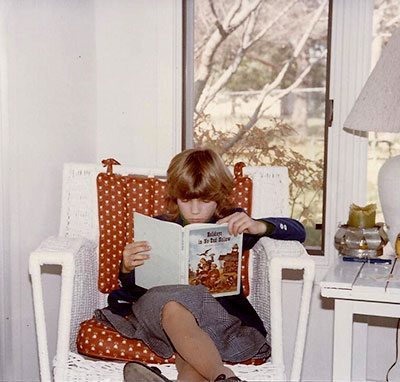 Broth­er and sis­ters or an only child? How did that shape your life?

I have a half sis­ter and half broth­er who are ten and twelve years old­er than I am.  I often describe myself as a semi-only child, as much of my child­hood was spent as the only kid at home. This taught me to enter­tain myself, cer­tain­ly, and meant I had plen­ty of time for read­ing and imag­in­ing and just mak­ing do.

This is one I’m still learn­ing (and prob­a­bly will be till I die). But so far I’ve learned con­tent­ment comes from grat­i­tude, from real­iz­ing how many sim­ple, won­der­ful, often-over­looked gifts we expe­ri­ence every­day. Like breath­ing. Have you ever con­sid­ered how amaz­ing it is that there’s air to fill your lungs every sin­gle moment? Con­tent­ment comes from lov­ing and being loved. And it comes from acknowl­edg­ing what you can con­trol and let­ting go of what you can’t. Eas­i­er said than done, I know.

Caroline Starr Rose was named a Publishers Weekly Flying Start Author for her debut novel, May B., which was an ALA-ALSC Notable Children’s Book. She’s also the author of the verse novel, Blue Birds, and the picture book, Over in the Wetlands. Caroline spent her childhood in the deserts of Saudi Arabia and New Mexico, camping by the Red Sea in one and eating red chile in the other. She taught social studies and English in four different states and worked to instill in her students a passion for books, an enthusiasm for experimenting with words, and a curiosity about the past. Visit her at carolinestarrrose.com

Read­ing Ahead 0
This week, join me as we con­tin­ue to look at books that orbit the con­stel­la­tions of chil­dren’s series books much-loved by adults: Louisa May Alcott’s books, the Lit­tle House books, the Anne of Green Gables books, and Maud Hart Lovelace’s Bet­sy-Tacy books. A brand new nov­el, Ven­om on the Riv­er, is now avail­able from my favorite young adult mys­tery author, Mar­sha Qua­ley.… more
Read more...

The Lamppost
What's in the Basket?
Page Break
Inspiration
Nonfictionary
What Gets Left Out
Red Reading Boots
The Rabbit Listened
Peace-ology
Knowing Your Past to Make Peace
Raising Star Readers
Norma Gaffron and Her Reading Team
February 2020
ADVERTISEMENT
ADVERTISEMENT