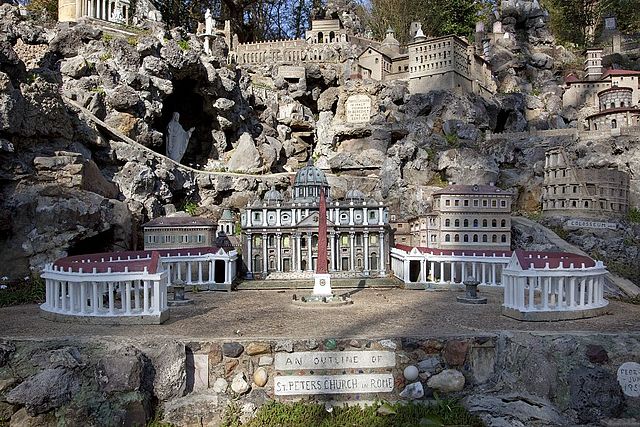 Dur­ing one of my vis­its to see my Alaba­ma brother’s fam­i­ly, we took a road trip to the Ave Maria Grot­to. That’s where a Bene­dic­tine Monk named Broth­er Joseph Zoet­tl built over 125 Mini-Me ver­sions of some of the great­est build­ings of the world.

Artists are often inspired by some­one else’s mas­ter­pieces.  But in work­ing with young writ­ers, I’ve found that it’s easy to mis­tak­en­ly swerve over the cen­ter line from the safe­ty of inspi­ra­tion into the dan­ger of pla­gia­rism (or trade- mark infringe­ment). Not to men­tion the ques­tions that arise when you’re teach­ing “cre­ative” writ­ing and the stu­dent in front of you has bor­rowed from anoth­er writer’s cre­ative­ness.

I’m not talk­ing about sneaky kids try­ing to get out of doing their work. I’m talk­ing about kids who are inno­cent­ly inspired by their favorite books, movies, or video games, and who are excit­ed to extend these adven­tures. And kids aren’t the only ones to do this. Writ­ers of all ages have post­ed hun­dreds of thou­sands of “fan fic­tion” sto­ries online. But where does “pay­ing homage” end and “tak­ing some­one else’s ideas” begin?

I don’t have a “one size fits all” answer about how to han­dle this sit­u­a­tion in the class­room. When the ques­tion comes up as part of a group dis­cus­sion, I take the oppor­tu­ni­ty to address the issue of pla­gia­rism.

When the ques­tion comes up when I’m read­ing an indi­vid­ual student’s sto­ry, I try to per­son­al­ize my approach. Some kids, I know, are ready to be chal­lenged to invent char­ac­ters and a set­ting “from scratch.” Oth­ers strug­gle might­i­ly to come up with their own ideas. Some­times giv­ing them per­mis­sion to bor­row a famil­iar char­ac­ter is the very thing that allows them to tru­ly engage in the act of writ­ing for the first time — rather than freez­ing up com­plete­ly. In those cas­es, I have a lit­tle chat with them about how impor­tant it is that they don’t just “steal” some­body else’s work. But I do some­times allow them to take inspi­ra­tion or even char­ac­ters from their favorite sto­ries and then write their own adven­ture using them. My hope is that in doing so, they’ll learn how to do it com­plete­ly on their own the next time around.

I think Broth­er Joseph would see the whole thing as an act of homage rather than a case of out­right theft.

Skinny Dip with Suzanne Costner
The Best Wish of All