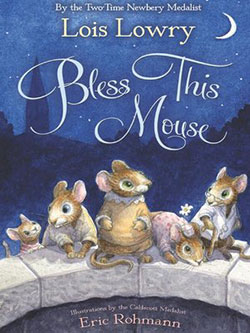 Over the last month or so, my nieces and I have been read­ing Bless This Mouse by Lois Lowry. We start­ed it on one scary­ish night when I picked them up at the hos­pi­tal emer­gency room. My broth­er-in-law had a mishap with a chis­el in the garage result­ing in a flesh wound that cre­at­ed an enor­mous amount of blood. (He’s fine — cou­ple of stitch­es and thank­ful it didn’t hit the artery.) The whole fam­i­ly jumped in the van and took him in…and then sat there amongst all the oth­er scary things that come into a busy ER.

The girls were wide-eyed and wound up when I got there. A lit­tle debrief­ing was need­ed. Over pop­corn we bal­anced the gory details with the scientific/medical ones. We went to their house — under the guise of pick­ing up a com­fort­ing blan­ket — and wit­nessed the blood drops on the garage floor etc. And then we came back to my house to see if we could get everyone’s heart-rate back down so there would be a prayer of going to bed once Mom and Dad came to get them. A good book was needed.

We went to my office to peruse the shelves. They’ve read many of the books I have. Oth­ers they aren’t old enough to read. We dis­cussed, and they gen­tly argued about which one would be per­fect. I pulled Bless This Mouse off the shelf.

“Yes, that one!” said the oth­er. And then they argued over who should get to car­ry it to the couch.

It was the mice on the front that fired their inter­est. Eric Rohmann illus­trat­ed them and they are quite per­fect. As are the draw­ings scat­tered through­out the lit­tle nov­el itself. They are exact­ly as you would imag­ine clothed church mice to look. Their per­son­al­i­ties, their rev­er­ence and irrev­er­ence, and their anthro­po­mor­phized mou­si­ness is just exact­ly right. He had a good sto­ry to work with, of course. Lowry’s Rod­er­ick, Hilde­garde, Igna­tious, and Har­vey are quite dis­tinct, love­able, mice full of grace and foibles both.

We read a few of the chap­ters that night. And we read a few more last week when I was in charge of get­ting them ready for bed while their par­ents were at “cur­ricu­lum night.” Both were absolute­ly tak­en in by the sto­ry. How do I know? Deep breath­ing the first night we read — they both breathe super deep through their nose when they’re utter­ly absorbed. The sec­ond install­ment, they were each try­ing to do some­thing else while I read — one was work­ing on a craft project and one was try­ing to build a hid­ing place from which to leap out and sur­prise her par­ents when they came home — and both kept los­ing their focus at what they were doing.

The con­flict in this book — that plot device that is so very nec­es­sary — cen­ters on the immi­nent risk of the “Great X” and the loom­ing risk of a rainy day Bless­ing of the Animals.

My nieces are grow­ing up in a house with a deep love for all God’s crea­tures. I wasn’t sure if they would under­stand that the Great X was the exter­mi­na­tor, and that the risk of cats dur­ing an indoor Bless­ing of the Ani­mals was a real threat for the church mice. They’ve been known to catch cute lit­tle mice in the house and keep them for extra love and obser­va­tion. They see no rea­son why they shouldn’t coex­ist with their cat and dog.

As I read along, I tried to decide whether to illu­mine the risks for them…or just hope it went over their heads. It became increas­ing­ly appar­ent as we turned pages that the risk of death by exter­mi­na­tion or ani­mal king­dom hier­ar­chy was going to be a major plot element.

We got to the scene in which the mice are try­ing to find the source of the Great X in the yel­low pages of the phone book. (The idea is that they’ll eat the page and then Father Mur­phy won’t be able to call for the Great X. Very resource­ful mice.) They look in the pages at the back of the phone book — the small sec­tion under X. And they do not find what they’re look­ing for.

“That’s not how it’s spelled, I bet,” said the eldest niece, not even look­ing up from her craft.

“Not how what is spelled?” said the youngest.

“It’s an x word — I don’t know the word — but it’s the peo­ple who come to your house to get rid of things they think are pests. Like bugs or mice. But the word doesn’t start with X….”

“Exter­mi­na­tor?” I vol­un­teered a bit nervously.

“Are the church mice going to die?” said the younger one.

“No,” said her old­er and wis­er sis­ter with great con­fi­dence. She looked up at her sis­ter. “That’d be a hor­ri­ble book. They’ll fig­ure it out.”

Of course. We haven’t fin­ished yet, but I, too, am pret­ty sure those mice will fig­ure it all out. And I’m grate­ful for a book that dove­tails with their imag­i­na­tions and love of ani­mals in such a way.