This Is Just To Say 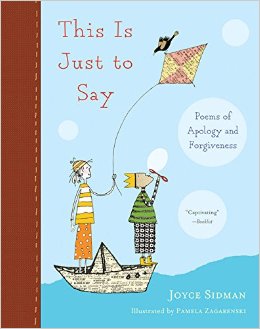 April is Nation­al Poet­ry Month, which is as good an excuse as any to take some poet­ry books off the shelf and have a read. I’m quite method­i­cal in April — it’s the hint of spring in the air, I sup­pose. I clean my office and then I build a stack of won­der­ful poet­ry books — some Bil­ly Collins, a lit­tle Emi­ly Dick­in­son, a tome of Robert Frost, Shakespeare’s son­nets, Mary Oliv­er, naturally…..

On top of this fine stack I put my col­lec­tion of Joyce Sid­man books. This means, to be hon­est, that I sel­dom make it down to the “grown-up” poets. Which is fine — I’m quite per­fect­ly hap­py wan­der­ing in Joyce’s books for the entire month. The oth­ers can be read…whenever. Joyce’s books have pic­tures. In the words and on the pages. I think all poets should be illustrated.

I say “Joyce,” all famil­iar like, because I know her. Which seems too fan­tas­tic to be true — I know none of those oth­er poets, except through their work. But Joyce I know — I saw her this past week­end, in fact. I hear her voice in her poems — even when it’s not her voice speak­ing. (I hear Bil­ly Collins in his poems, too, but Joyce’s voice is not so deadpan.)

We’re sev­er­al days into April and I’ve yet to make it past the book that is pos­si­bly my favorite in my Joyce Sid­man col­lec­tion: This is Just To Say: Poems of Apol­o­gy and For­give­ness. It’s a slim vol­ume — paper­back. Some­times it gets shoved back on my book­case and I pan­ic when I look up and don’t see it right away. It’s illus­trat­ed by Pamela Zagaren­s­ki, an artist whose web­site I some­times vis­it just to browse and mut­ter her last name over and over again like its own poem. She has illus­trat­ed a few of Joyce’s books. They are an inspired pair, I think.

I bought this book as soon as I saw that the very first poem was, as I sus­pect­ed, William Car­los William’s “This Is Just To Say,” one of my most favorite poems. Anoth­er of his poems “The Red Wheel Bar­row” is one of the only poems I’ve man­aged to keep mem­o­rized since col­lege. I recite it when walk­ing some­times still.

Joyce uses William’s poem, “This is Just To Say,” as a mod­el when she teach­es, so says her web­site. And it is the mod­el for this bril­liant book of poet­ry: a sto­ry — or per­haps I should say sto­ries—told through poems of apol­o­gy and forgiveness.

I’m embar­rassed to say that I did not real­ize this book told sto­ries until I read some of the poems aloud to a group of pre-school­ers. An astute 4‑year-old point­ed out to me that one poem went with anoth­er, which is when I real­ized the poems were in pairs. (We’ll just focus on the bril­liance of the 4‑year-old and not my slop­py read­ing.) Ever since, when I read this book, I read the apol­o­gy poem and then the “fol­low-up poem,” which is often a for­give­ness poem, but some­times just an expla­na­tion — and there­in lie the sto­ries. And these sto­ries — my heart! — they run the gamut of the lives of chil­dren. From dodge ball games to mean things said…from things break­ing to break­ing hearts…from secrets kept to con­fes­sions made….from crush­es to hon­est-to-good­ness love…from fright­ened kids to despair­ing parents.