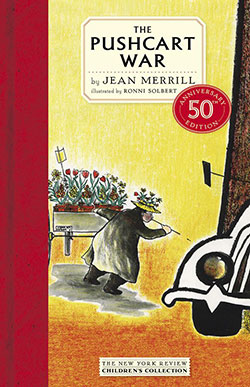 I first heard of  Jean Merrill’s The Push­cart War in grad school. I read it because a fel­low stu­dent spoke with absolute glee about it. I’ve not heard a book rec­om­mend­ed with such laugh­ter and vig­or before or since. And I fell into the book just as she insist­ed I would. Fell, I tell you. Lost my head, really.

My kids did, too. I hand­ed it to them with a casu­al, “It’s real­ly good and I think you’ll like it…” sort of rec­om­men­da­tion. I want­ed to see if they would, as I did, google “push­cart war” to see when this had hap­pened and why we didn’t know more about it. They did. Well, the lit­tle one said, “Wait…did this real­ly happen?!”

Appar­ent­ly, we each read over the dates of the for­ward and the author’s intro­duc­tion. Both are dat­ed in the year 2036, which would’ve been a clue, of course…but so absorbed were we in the “report­ing” of the Push­cart War — in the strug­gle, the unfair tac­tics and pol­i­tics of the truck­ers, and the plight of the push­cart ven­dors — that we missed the clues, I guess.

When The Push­cart War was pub­lished in 1964, it was set in New York City in 1976. When it was repub­lished in 1974, it was set in 1986. The 1985 edi­tion is set in 1996 — always the not-so-dis­tant future, in oth­er words. When the New York Review Children’s Col­lec­tion pub­lished the 50th anniver­sary edi­tion a cou­ple of years ago, the date changed to 2026 (this is the edi­tion I have). This book has had polit­i­cal res­o­nance in each of the eras in which it has pub­lished and repub­lished, and the plight of the push­cart ven­dors cer­tain­ly still rings True, hilar­i­ous­ly and poignant­ly, today.

The sto­ry could be cat­e­go­rized as “nar­ra­tive jour­nal­ism,” pub­lished ten years after the events of the war. The for­ward, writ­ten by one Pro­fes­sor Lyman Cum­ber­ly of New York Uni­ver­si­ty says “…it is very impor­tant to the peace of the world that we under­stand how wars begin….” The Push­cart War shows us. Kids under­stand the issue at hand — the big truck­ing com­pa­nies want the roads cleared for trucks and only trucks. The truck­ing indus­try cites the impor­tance of deliv­er­ies being on time, the gen­er­al agree­ment that traf­fic is awful etc. The push­carts — the lit­tle guys — are the first target.

But they fight back! And the fight is glo­ri­ous and one that any­one who has ever been bul­lied or wit­nessed bul­ly­ing or has bul­lied will under­stand. There’s The Daf­fodil Mas­sacre, which starts it all off, and then we’re quick­ly intro­duced to Mor­ris the Florist, and Frank the Flower, and Max­ie Ham­mer­man, the Push­cart King. Movie star, Wan­da Gam­bling, sees the dan­ger signs — don’t we all? I mean, the taxi dri­vers grew cau­tious in their dri­ving! — and pret­ty soon there are famous speech­es and secret meet­ings, trig­ger­ing words and secret weapons. Then there’s an all out War. It’s basi­cal­ly David and Goliath all over again.

But there’s some­thing about the way it’s writ­ten — I guess it’s the “nar­ra­tive jour­nal­ism” tone — before you know it, you’re search­ing Wikipedia to get the details nailed down.

If I were a teacher of fourth graders, I’d read a chap­ter of this time­less clas­sic every day. And I’d notice, and pon­der, as I did and do, that this book, a sto­ry for chil­dren, has only the briefest men­tion of any kids. The main char­ac­ters are entire­ly adults.