A Few Tall Tales from the Land of Rampaging Zucchini 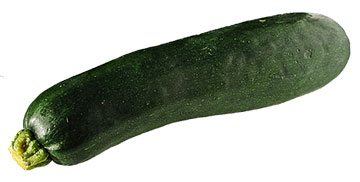 Jack­ie:  Phyl­lis, the zuc­chi­ni seeds you gave me have grown into a plant that knocked on our back door this morn­ing. I gave it cof­fee and it retreat­ed to the yard, head­ing toward the alley.

When I was a kid one of my favorite sto­ries was the tall tale of Paul Bun­yan. I laughed at the exag­ger­a­tion, the total wack­i­ness of an ox so large his foot­prints made the Great Lakes. As an adult, I real­ized that Paul Bun­yan was actu­al­ly a clear-cut­ter and that took some of the lus­ter off the sto­ries. But I still love tall tales. What fun to come up with a rol­lick­ing tale of exag­ger­a­tion! We found some old favorites — and some new favorites. 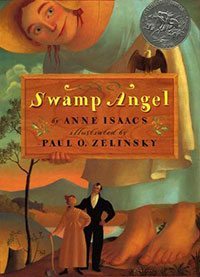 Swamp Angel by Anne Isaacs, (illus­trat­ed by Paul O. Zelin­sky, (Dut­ton, 1994) is a win­ning com­bi­na­tion of under­state­ment and exag­ger­a­tion: “…when Angel­i­ca Lon­grid­er took her first gulp of air on this earth, there was noth­ing about the baby to sug­gest that she would become the great­est woodswoman in Ten­nessee. The new­born was scarce­ly taller than her moth­er and couldn’t climb a tree with­out help…she was a full two years old before she built her first log cab­in.” Of course it’s the Swamp Angel’s bat­tle with the huge bear Thun­der­ing Tar­na­tion that is at the heart of the sto­ry. The bear dis­patch­es four woods­men before Swamp Angel sets out. But real­ly, who cares who wins? It’s the out­sized odd­i­ty that’s fun: Swamp Angel las­sos the bear with a tor­na­do; they cre­ate the Great Smoky Moun­tains from the dust of their fight­ing; their snor­ing cre­ates a rock­slide. The unfor­tu­nate Tarnation’s pelt became the Short­grass Prairie.

This sto­ry calls us all to look around and imag­ine what won­der­ful larg­er-than-life char­ac­ter cre­at­ed our rivers and hills, caves and prairies.

Phyl­lis:  I love this book, with its out­size sto­ry and out­size art. And I love that this is a woman who can lift a whole wag­on train out of Dejec­tion Swamp (which is how she got her name Swamp Angel). When the men sign­ing up to hunt Thun­der­ing Tar­na­tion tell her to go home and quilt or bake a pie, Swamp Angel responds that quilt­ing is men’s work and that she aims to bake a pie — “A bear pie.”  When Thun­der­ing Tar­na­tion meets his end under a tree that Swamp Angel snores down while they are fight­ing in their sleep, she “plucked off her hat, bowed her head, and offered up these words of praise: ‘Con­found it, varmint, if you warn’t the most won­der­ous heap of trou­ble I ever come to grips with!’” Not only does she bake bear pie, she also makes “bear steaks and bear cakes, bear muffins and bear stuf­fin,’ bear roast and bear toast,” enough for a feast and to restock the all the root cel­lars in Ten­nessee just in time for winter.

Jack­ie: All sto­ries cre­ate a shared com­mu­ni­ty between writer, or teller, and read­ers, but it seems to me that tall tales have the added advan­tage that we are shar­ing a joke. We all know that a bear and a fight­in’ woman did not cre­ate the Great Smoky Moun­tains. We are all in on the joke. We get it. And that is fun in a world where there is so much we don’t get. 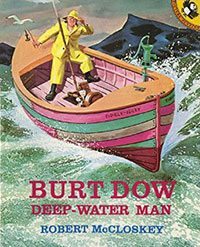 I have always loved the title of Robert McCloskey’s Burt Dow Deep-Water Man. And the book has a musi­cal­i­ty to it that makes me want to read it aloud. Burt is a retired deep-water man with two boats — one he fills with gera­ni­ums and sweet peas (McCoskey calls them “Indi­an peas,” I can’t find ver­i­fi­ca­tion of the sweet peas, but they are climbers and the flow­ers look like sweet peas.) And the oth­er is Tide­ly-Idley with a “make-and-break engine.”  Burt says, “She’s got a few ten­der places in her plank­ing, but you can’t see day­light through her nowhere.”

One day Burt takes out the Tide­ly-Ide­ly and has an unex­pect­ed adven­ture. He’s fish­ing for cod and hooks a whale. “’Ahoy there, whale!’ bel­lowed Burt. ‘Hold your hors­es! Keep our shirt on! Head into the wind and slack off the main sheet!’ But the whale couldn’t hear because his hear­ing gear was so far upwind from his steer­ing gear.”  This is just the begin­ning. Burt has to hitch a ride inside the whale, paint his way out, then escape a school of whales demand­ing band-aids on their tales. It might have been too much for a younger fish­er­man, but not Burt Dow. He pla­cates the whales and makes it home just as the cock begins to crow.

This book is so much fun. It’s a Mainer’s retelling of Jon­ah with a lit­tle “whale insid­er” art thrown in for fun. And I have to men­tion the lan­guage. McCloskey wrote a sto­ry that should be read out loud on someone’s porch. Burt’s roost­er crows  “Cock­ety-doo­d­ly;” his water pump goes “slish-cashlosh, slish-caslosh;”  Burt always keeps a “firm hand on the tiller;” and the make-and-break engine always goes “clack­ety-bangety.”

An entry on Wikipedia notes that there was a Bert Dow, deep-water man, on Deer Isle where McCloskey lived. He is buried in a Deer Isle ceme­tery. His tomb­stone says: “Bert Dow, Deep Water Man, 1882 – 1964.”  Robert McCloskey helped pay for the stone.

Phyl­lis:  Burt isn’t phys­i­cal­ly larg­er than life in the way that Swamp Angel or Paul Bun­yan are, but his prob­lems are whale sized, and as with oth­er tall tale fig­ures, no prob­lem is so big Burt can’t solve it.  Along with lan­guage that delights and tick­les, McCloskey makes good use of page turns. Once Burt acci­den­tal­ly hooks the whale’s tail and his gig­gling gull waits to see “what would hap­pen next,” so does the read­er, since start­ing on the next dou­ble-page spread and on many of the fol­low­ing spreads, McCloskey breaks off his sen­tences in the mid­dle. “But the very next moment it came to Burt’s atten­tion that he’d pulled up a”….

We turn the page to fin­ish the sen­tence and read WHALE OF A TAIL. Spread after spread, McCloskey builds sus­pense, and spread after spread, while the sit­u­a­tion seems to wors­en, Burt is nev­er dis­mayed, even when he real­izes that when he asked the whale to swal­low him to save him and his boat AND gull from “a gale of a wind,” he doesn’t know for sure that the whale heard the part where they were sup­posed to be “tem­po­rary guests, so to speak.” Once they are burped free and also sat­is­fy all the oth­er whales who want bandaids on their tales, pump out the Tide­ly-Idley, slish-caslosh, slish-caslosh, crank up the make and break, clack­ety-BANG! Clack­ety-BANG! Burt and his gull sail home in time, we assume, for break­fast. A rol­lick­ing sto­ry full of rol­lick­ing lan­guage and fun. 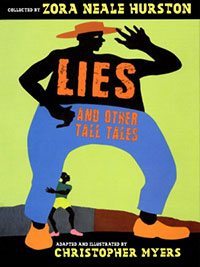 Jack­ie: We are also con­sid­er­ing an inter­gen­er­a­tional effort. Christo­pher Myers illus­trat­ed some of the “Lies and Oth­er Tall Tales” col­lect­ed by Zora Neale Hurston (Harper­Collins, 2005). These are not long sto­ries but are won­der­ful­ly rich in play with lan­guage and exag­ger­a­tion, so won­der­ful that we want to include it even though it’s a fair­ly recent book. “I seen a man so short he had to get up on a box to look over a grain of sand.” That’s one-upped by “That man had a wife and she was so small that she got in a storm and nev­er got wet because she stepped between the drops.”

This live­ly book might work best for old­er chil­dren. Younger chil­dren could be dis­turbed by some of the exag­ger­a­tions (a man so mean he swal­lows anoth­er man whole).  For those who are ready, this book will bring some smiles — and some under­stand­ing of the ver­bal games of the African Amer­i­can cul­ture. Christo­pher Myers notes that these tales, “were used in some ver­sion of play­ing the dozens…an African Amer­i­can cul­tur­al prac­tice, which if you haven’t heard about it, you bet­ter ask your mama! It includes mama jokes and humor­ous diss­ing, which if you don’t know what diss­ing is, you don’t have the sense God gave a flea.”

Phyl­lis:  As Christo­pher Myers writes, “Liars, back in the day, could tell a lie so good, you didn’t even want to know the truth.” And these lies are so delight­ful and fan­cy-tick­ling that I agree with him. One of my favorites is the folks who built a church on “the poor­est land I ever seed” and had to use ten sacks of fer­til­iz­er before they could “raise a hymn on it.” An author’s note tells how the illus­tra­tions are made from found bits of fab­ric  and paper that Myers has trans­formed into “’quilts’ as wit­ty and beau­ti­ful as the phras­es Zora Neal Hurston found.” 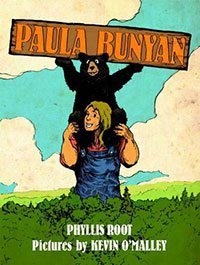 Jack­ie:  Phyl­lis, I can’t quit with­out men­tion­ing your tall tale—Paula Bun­yan (Far­rar, Straus & Giroux, 2009). Paula has way more sense than God gave a flea. She actu­al­ly replants trees where oth­er log­gers have cut them down. And she’s fast. “Paula could run so fast that once when she for­got to do her chores, she ran all the way back to yes­ter­day to fin­ish them.” It must have been fun to re-tell the Paul Bun­yan sto­ry as a green­ing of the earth.

Phyl­lis:  It was fun. The sto­ry start­ed as some­thing my kids and I told one fall while rid­ing on a hay­wag­on to pick Har­al­son apples, our favorites.  And why not anoth­er tall tale woman? What’s against it?

None of us may be as large or fight as fierce­ly as Swamp Angel, we may not know a man so hun­gry he swal­lowed him­self, we may nev­er have to fig­ure out how to get on the out­side of a whale. But these tales remind us that even in our ordi­nary lives we can keep a firm hand on the tiller, come to grips with what­ev­er “won­drous heap of trou­ble” comes our way, and still make it home in time for breakfast.

And speak­ing of break­fast, I don’t mean to brag, but my zuc­chi­ni pound­ed on the door this morn­ing and demand­ed a lat­te and a cin­na­mon crois­sant.  With butter.