In this inter­view with Melis­sa Sweet, illus­tra­tor of A Riv­er of Words: The Sto­ry of William Car­los Williams, our Book­storm™ this month, we asked six ques­tions and Melis­sa kind­ly took time from her busy days of vis­it­ing schools and cre­at­ing art. 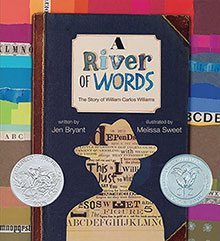 Do you recall the first time you encountered a William Carlos Williams poem?

My first introduction to William Carlos Williams was when I was seven years old and went to the Metropolitan Museum of Art. I saw a  painting by Williams’s  friend Charles Demuth, based on Williams’s poem “The Great Figure.” I loved both the painting and the poem. 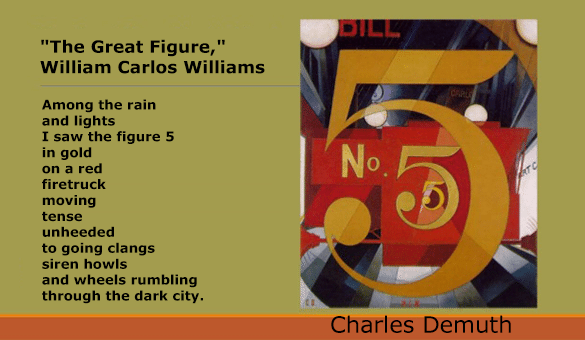 Do you have a list of Most Favorite Poets? Was William Carlos Williams on that list before you began the research for this book? Is he on that list now?

My short list is Mary Oliver, Billy Collins, and, yes, William Carlos Williams is now on that list.

When you begin to illustrate a book like this, what is your very first step? And what do you do next?

First I decide how and where to research. I’m looking for clues as to what to draw to inspire the illustrations. For this book I read biographies about Williams, his poetry, and newspaper articles about him. It was important to travel to Rutherford and Patterson, NJ, to see where he lived and worked. At the Rutherford Public Library, I saw his bowler hat, his manual typewriter,  and the prescription pads he used as a doctor. All those things became inspiration for the art. Then, back in the studio, I make a dummy placing the words on the page and begin to sketch to out the paintings or collages. Lastly, I make the final art. 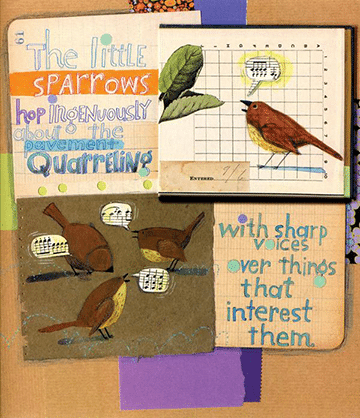 In the book, we see handwritten bits of poetry in several different styles of handwriting and we also see typeset scraps of paper as well as intriguing bits of type. Do you create these by hand? By computer? With friendly help?

All my art is created by hand—I don’t use the computer to make the illustrations. I cut up old books and use lettering from wherever I can find it. Incorporating calligraphy and hand–lettering into the art makes the piece more fun and lively. A typeset font would look very different, maybe somewhat static. In A River of Words I recreated Williams’s handwriting in places, and hand–lettered his poems within the art. The content of the poems became the inspiration for what to draw. 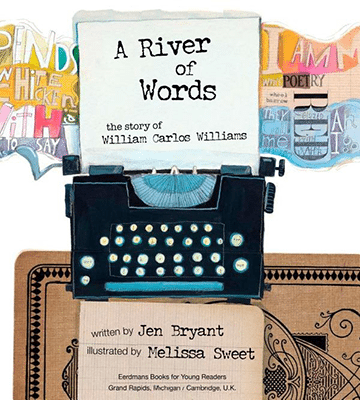 Are there entire spreads you prepare that don’t make the final cut of the book? When you send the illustration in for review by the editor or art director, do you leave things unglued so they can be moved if requested? And what do you use to affix the parts of your collage?

Sometimes spreads need to be redone, but rarely. The editor and art director see the dummy, but typically they don’t see the art in progress, just the final art. It’s difficult to plan or sketch a collage–it happens as you go along adding and subtracting elements to make it work visually. (Even I don’t know exactly how the art will look in the end!) I use stick glue, white glue, and depending on the materials, I might need something strong like epoxy. Kids often ask how my arts gets “in” the book. My work is generally photographed since there is too much dimension in the pieces to scan them. Those photos are downloaded to the designer and the text is added digitally.

If you had met William Carlos Williams, what question would you have asked him?

I have two questions: Where was the red wheelbarrow? What did you think when you first saw it?

Melissa Sweet has illustrated nearly 100 children’s books from board books to picture books and nonfiction titles. Her collages and paintings have appeared in the New York Times, Martha Stewart Living, Madison Park Greetings, Smilebox and for eeBoo Toys, which have garnered the Oppenheim and Parents Choice Awards. She is the author and illustrator of Balloons Over Broadway: The True Story of the Puppeteer of Macy’s Parade which garnered many awards including: the 2012 Sibert Medal, the NCTE Orbis Pictus Award, an ALA Notable Book, the Flora Stieglitz Straus Award from Bank Street Books as well as the Cook Prize which honors a STEM (science, technology, engineering and math) picture book. Melissa illustrated A River of Words: The Story of William Carlos Williams by Jen Bryant, a 2008 Caldecott Honor book, an NCTE Notable Children’s Book and a New York Times Best Illustrated. She has worked with Jen Bryant on two more projects, The Right Word: Roget and His Thesaurus, a 2015 Caldecott Honor Book and Sibert Medal Winner, and A Splash of Red: The Life and Art of Horace Pippin, which received the Schneider Family Book Award and a Sibert Honor. Learn more about Melissa Sweet on her website.

One Response to Melissa Sweet