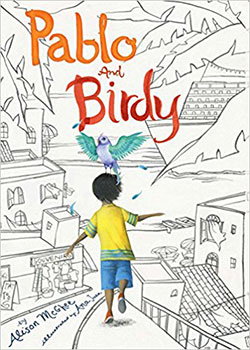 There are books I read with my eyes leak­ing begin­ning to end. Count­ing by Sevens…Swallows and Amazons…The View From Saturday…Because of Winn Dixie…Orbiting Jupiter…. I don’t mean to say these books make me cry — that’s anoth­er cat­e­go­ry, the ones that make you ugly cry so you can’t read it out­loud. Rather, these leaky-eye books are sto­ries read through a watery prism from the first page on. I nev­er sob or snif­fle, I just wipe at my eyes with my sleeve for the entire length of the book. If I read them aloud to my kids when they were lit­tle, they com­ment­ed. “Mom­my, are you cry­ing?” And I quite cheer­ful­ly could say, “Not exact­ly. This one just makes my eyes leak.”

It’s like the book fills my heart to such an extent — With what? Won­der? Beau­ty? Grat­i­tude? Bit­ter­sweet­ness? Truth? — that some­thing has to over­flow. And that some­thing is my eyes, I guess. I love many many books, but the eye leak­ers are in a spe­cial cat­e­go­ry unto them­selves.

Ali­son McGhee’s Pablo and Birdy joined the list most recent­ly. I knew from the first line.

This is the sto­ry of a boy named Pablo who washed up on the beach in an inflat­able swim­ming pool as a baby. Birdy is the par­rot who was found cling­ing to the ropes that held Pablo safe. The book opens as Pablo is turn­ing ten. He is sur­round­ed by the love of an eccen­tric group of islanders who try to pro­tect him from the sto­ry of his past for which they have no answers. But that doesn’t mean Pablo doesn’t have ques­tions.

Birdy is a flight­less and voice­less par­rot. She is laven­der-feath­ered and man­go-scent­ed and the bond she has with her Pablo is a fierce one. Their rela­tion­ship is large­ly respon­si­ble for my leak­ing eyes.

There are slap­sticky fun­ny moments as well as sad and wor­ri­some moments in Pablo and Birdy. There’s an eclec­tic cast, human and not, includ­ing the Com­mit­tee, a group of rag-tag island birds who com­ment on all of the goings-on. Also a pas­try-steal­ing dog thread that can break your heart. And through it all, there is the mys­te­ri­ous myth of the sea­far­ing par­rot who knows and can repro­duce all of the sounds of the world that have ever been made.

A strange wind blows in dur­ing the events of this nov­el. Island wis­dom holds that “the winds of change mean for­tune lost or for­tune gained.” As Pablo says at the end, it’s not always easy to tell what has been lost and/or gained. That’s fun­da­men­tal­ly what the sto­ry is about, I think — that elu­sive and/or — and as such, it is a beau­ti­ful one to press into the hands of kids you love.

Two of my nieces turn eleven this spring. They each bear a slight resem­blance to Pablo in dif­fer­ent ways — and they are loved just as fierce­ly by we, their “islanders.” There is still space in their heads, hearts, and lives for won­der and imag­i­na­tion, which is the only thing this book requires. I’ll even go as far as to say this book can restore won­der and imag­i­na­tion if it’s on the way out. They’re both get­ting a signed copy for their birth­days—shh­hh don’t tell! I don’t know if their eyes will leak or not. But I’ve dreamt of read­ing it with each of them — leaky eyes and all — and I think they’ll love it.