I’m a giraffe. A medi­um-sized giraffe, because I was tall when I was young, but now — to my fury — I’ve passed the age when you begin to shrink. A giraffe is shy, and does­n’t make much noise: that’s me, I think. The giraffe and I are both good at look­ing around and notic­ing things — though in my case I’m col­lect­ing mate­r­i­al for books, and in hers she’s look­ing out for the lion who wants to eat her. The giraffe is good at pol­li­nat­ing flow­ers and spread­ing seeds while she’s brows­ing on tree­tops, and I do those things while I’m gar­den­ing. And we both have spe­cial friends, though we don’t belong to a herd.

Oh yes, and we both have long eye­lash­es.

Which book of yours was the most dif­fi­cult to write?

It’s called Sil­ver on the Tree, and it drove me mad. It was the last in a sequence of five books called The Dark Is Ris­ing, so it had to tie togeth­er all the strands of sto­ry in the first four books, and rise to a ter­rif­ic cli­max in which good tri­umphs over evil. Writ­ing it took twice as long as any of the oth­er four. There are things in it that I love, though I nev­er did feel the cli­max was ter­rif­ic enough. But when I wrote the last page, I cried, because I’d lived with my fam­i­ly of char­ac­ters through five books and I was nev­er going to see them again.

One of my books has been a bad movie, with a sto­ry remark­ably unlike the one I wrote. But I’d love to see a book called King of Shad­ows made into a film, ide­al­ly by Wes Ander­son. It’s about a mod­ern boy actor who finds him­self back in Eliz­a­bethan Eng­land, act­ing oppo­site William Shake­speare in the Globe The­atre. So the star would be a boy actor whom nobody’s yet heard about. And Shake­speare would be played by.……got any ideas?

What book do you tell every­one to read?

The next one by Mar­cus Sedg­wick or William Alexan­der.

Are you a night owl or an ear­ly bird?

In my twen­ties I was a night owl, sit­ting up late writ­ing books after spend­ing the day as a news­pa­per reporter. In my thir­ties I had young chil­dren, so I was up both ear­ly and late. Grad­u­al­ly since then I’ve turned into an ear­ly bird — because today I live on an island in an estu­ary salt­marsh, where I open my eyes in the morn­ing to the sun­rise. Every day it’s dif­fer­ent, every day it’s beau­ti­ful. Can I show you one? 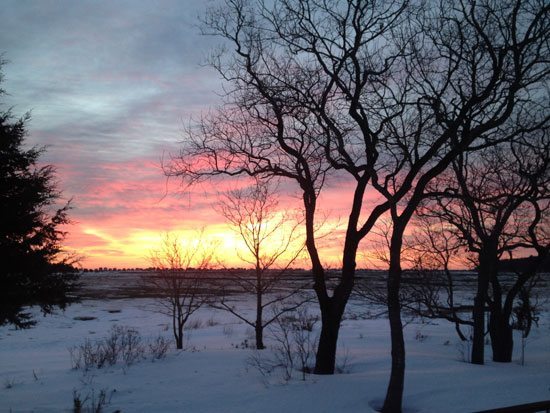 Susan Cooper is the author of the classic five-book sequence The Dark is Rising,, and her books have won a Newbery Medal, a Newbery Honor Award, and two Carnegie Honor Awards. In 2012 Susan was given the Margaret A. Edwards Award, and in 2013 she received the World Fantasy Award for life achievement. Her most recent books for children are King of Shadows, Victory, and Ghost Hawk. Born in England, she was a reporter in London for several years before emigrating to the United States. For more information please visit her website.

One Response to Skinny Dip with Susan Cooper