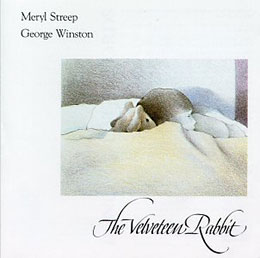 Meryl Streep is in the news this week for her speech at the Gold­en Globes. It’s a pow­er­ful piece — though, truth be told, I think she could read out a phone direc­to­ry and it would be pow­er­ful. She began by apol­o­giz­ing because she’d lost her voice. It was loud enough to hear, but cer­tain­ly rough. I was over­come by an urge to make tea with hon­ey while watch­ing.

Lis­ten­ing to her made me think of the cas­sette tape we had of her read­ing of The Vel­veteen Rab­bit when our kids were small. I think we received it as a gift the Christ­mas I was preg­nant with #1 Son. I might’ve even lis­tened to it dur­ing labor, now that I think about it. In the ear­ly stages any­way.

We trav­elled with The Vel­veteen Rab­bit and a small boom­box with that kid — he need­ed it to go to sleep at night. We used it like a drug on car trips. It sel­dom failed us. We lis­tened to it so often that the record­ing became hard to hear, which had the effect of mak­ing you lis­ten all the hard­er. Tru­ly, by the time the boy could talk, we prob­a­bly could have recit­ed the sto­ry, though not with the love­ly inflec­tion Meryl Streep con­veys, of course.

We tried using it with Child #2, as well, but the record­ing had been loved much, and had not become real, as the Vel­veteen Rab­bit and Skin Horse had, so much as unin­tel­li­gi­ble. You could still hear Win­ston’s piano, but the sto­ry did­n’t quite come through. By age three, Dar­ling Daugh­ter often said it made her feel too sleepy and asked that it be turned off. (She has nev­er slept as sound­ly or as long as her broth­er.…)

I have sev­er­al copies of this sweet sto­ry in book form — var­i­ous artists have illus­trat­ed it and I have large for­mat books and small­er, too. I don’t recall read­ing it to either child, how­ev­er. I love to read aloud, and this is a favorite sto­ry of mine…but who can com­pare to Meryl Streep? Plus, sel­dom do I have some­one in my liv­ing room at the piano to accom­pa­ny my nar­ra­tion.…

But I’m so glad our kids had this sto­ry in their life in the way they had it. Meryl Streep and George Win­ston spin­ning Margery Williams’ mag­i­cal tale of love and childhood…well, I can’t think it gets much bet­ter than that.