We are hon­ored to inter­view the high­ly respect­ed Richard Jack­son, who is on to his next career as a writer. His most recent­ly pub­lished book is all ears, all eyes, a lush and irre­sistible read-aloud book, illus­trat­ed by Kather­ine Tillit­son (Simon & Schus­ter). We thought we’d take the oppor­tu­ni­ty to talk with him about the pro­gres­sion from his edi­to­r­i­al career to his writ­ing career and the four books he has written.

Will you please tell us a bit about your editorial experience?

After Army service, I graduated from NYC in 1962 with a Master’s degree in education. I worked first at Doubleday, not with children’s books, then at Macmillan and David White.

In 1968, you co-founded Bradbury Press. You moved to Orchard Books in 1986 and then began the nonfiction publishing imprint DK Ink in 1996. Three years later, in 1999, you had your own imprint at Simon & Schuster with the venerated Atheneum Books. Has this journey taken you around unexpected bends in the road?

I’ve never been subjected to a job interview.

As you were gaining experience, which editors do you feel taught you the most?

Frances Keene and then Susan Hirschman at Macmillan.

Do you think most picture book editors are equal parts visual and verbal?

Most likely. For me, as writer, as editor, the words are of first importance.

What did your authors teach you?

While you were an editor, did you always have a yen to write your own books?

No. But retirement—in so much as I am retired; I still work on a few books annually by old publishing friends—suddenly stretched rather blandly before me. I began tinkering with words, with play, with wordplay…

You’re working with an editor now, a colleague. What do you look for from your editor?

Efficiency. A sense of humor. Taste. Candor—i.e., a willingness to see the possibilities of something not yet final. 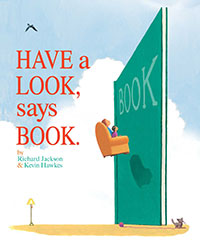 Kevin Hawkes illustrated this book that is playfully focused on adjectives. The text rhymes but not in a way that feels read-aloud confining. How do you work on the poetry in a picture book?

In my head, often while driving.

Storytime librarians are focusing more than ever on teaching. This book offers an opportunity to talk about the pleasure of books, the love of words. Have you always been fond of words?

A verbal child was I. As opposed to athletic.

What sparked the idea for this book?

The simple but enormous word “touch” has at least two meanings… There are many see, hear books, a few smell and taste books—hardly any about touch. Watching children and grandchildren touch the pages and pictures of a book, I thought…let’s see if I can honor that young-kid impulse: to point out, to make contact with a finger, to search a book for a tactile dimension equal to seeing and hearing. 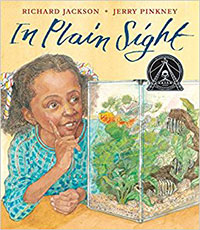 The sto­ry in this book is uni­ver­sal, a grand­fa­ther and grand­daugh­ter who enjoy each other’s com­pa­ny. Grand­pa, who lives in a bed­room in Sophie’s house, always has some­thing for them to do togeth­er, to find some­thing he’s hid­den In Plain Sight.

What inspired this universal story of love?

Well, I was the Grandpa, I think. Sophie, a sister who died at four. She always announced her presence with “Here I ahm.” In my imagination, the game element was as important as anything, so it was based upon a game my father played on us, his children, on Christmas night—find objects hidden in unlikely places, such as a dollar bill wrapped around a book’s spine in a bookcase—very tricky!

It’s so important for children who have older generations living with them to see themselves in books, to understand that families extend themselves when needed.

Was it your idea to have Grand­pa sup­port­ed by a wheelchair?

Jerry’s, I think. As was Grandpa’s athletic and military past, as was the cat.

This manuscript was interpreted by the much-admired author and illustrator, Jerry Pinkney. How was he brought into this project?

Neal Porter’s idea, at Roaring Brook. They had not worked together before. I asked Neal, quite casually, I remember, if this family might be black (they weren’t while I was following the conversation which accounts for the story here). Jerry widened and deepened every image; note Sophie’s school clothes, for instance. Or the illustration on the binding of the book—not a repeat of the jacket, but something new and on its own; that’s Grandpa’s nature, don’t you think; there’s always a little more to give. 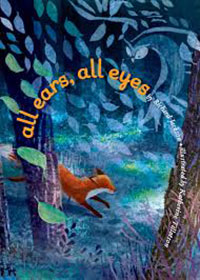 Your text for this book is so evocative of being outdoors at night, particularly in a forested or wild area. Why did you want to share that experience with readers and listeners?

The setting is a bit of woods, across a brook near our house in the country north of New York City. Real country, if you can believe. One night a yodeling fox awoke me and my wife. Moon and mostly darkness. Stillness, except for Mr. Fox. Magical. We got the children up (they are part of my dedication for this book) and, barefoot, we went outside, across the grass, up to the brook’s bank. We listened and without entering the woods, let the woods enter us. I hoped to write a poem to that night, that fox, that family experience.

When you wrote the text for all ears, all eyes, did you have an illustrator in mind? Why?

Yes indeed, the text was for Katherine Tillotson always, once the opening words sprang from my memory. She suggested the project somehow, and inspired it all along, from a very early rendition of a lurking owl. Next came Caitlyn Dlouhy and Ann Bobco (Atheneum’s brilliant art director), and the four of us played for months and months. Until quite close to the “end,” I was fussing with rhymes and line breaks. Such fun.

Many people who want to write books for children have been told that they’ll never work directly with their illustrator. Did you include instructions for how the text might be illustrated? As an editor, does your mind work that way?

I give a little guidance when the artist will need it—the main boy wears glasses, for example. And I break the text into page and page turn units. In my head I’m imaging a movie. But the illustrator is the cameraman (or woman), and often comes up with totally surprising and often just-right new views.

Don’t miss read­ing our inter­view with Kather­ine Tillot­son about this book. 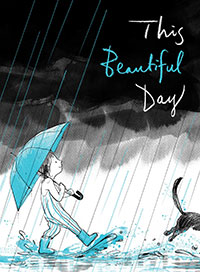 In August of this year, we’ll be treat­ed to anoth­er book you wrote, this one filled with humor and whim­sy. It begins with a bor­ing, rainy day, but the atti­tude of the three chil­dren and their moth­er brings out the sun.

With your considerable experience as an editor, do you reflexively envision your text on the page?

Reflexively? I think not. I do imagine page turns—and often, as suggested above, an illustrator will have a better idea and I’ll be tickled.

When you were an editor, did you look forward to the surprise of the illustrator’s rough sketches, their interpretation of the author’s story? 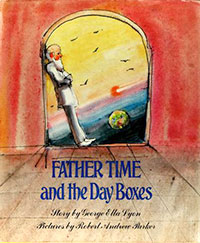 You bet! I once published a picture book, George Ella Lyon’s and Robert Parker’s Father Time and the Day Boxes (o.p), using the sketches, which were perfect as they were. Had I imagined them as Bob presented them? No way. It’s ideal to be surprising and just right from the get-go.

Now that it’s your manuscript being interpreted, how does that experience differ?

Not much different. I hadn’t imagined a rainy beginning to this day, so was taken aback at first; eventually, I have come to see the wisdom of giving the narrative this “hinge” in mood. What you suggest (that sun is attitude induced) is irresistible—and completely Suzy’s idea.

Thank you for shar­ing your thoughts with us, Richard Jackson!

I’ve admired the books he’s edit­ed, some of the finest in the chil­dren’s lit­er­a­ture canon, so it’s a plea­sure to hear from him as he walks his next path as a writer.

This is such a deeply heart­en­ing inter­view, and it comes at such a deeply dis­tress­ing time. For the min­utes that I’m read­ing this gen­er­ous con­ver­sa­tion, the world seems gen­tly whole, made up of intri­cate­ly relat­ed parts: the yodel­ing fox and his night­time woods, the child who lives in mem­o­ry by announc­ing her­self, “Here I ahm…” Thank you for this thought­ful explo­ration of an array of beau­ti­ful things.

I appre­ci­at­ed read­ing this inter­view and will intro­duce Have a Look, Says a Book to my Eng­lish stu­dents train­ing to be teach­ers at NORD Uni­ver­si­ty (Levanger) here in Norway.