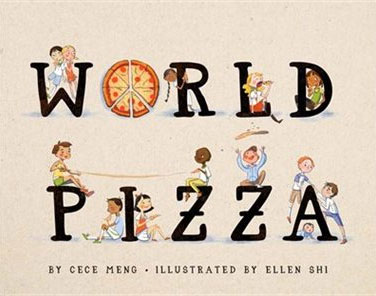 Once in awhile I find a book on my read­ing pile that I’ve passed by a few times. It might be that the cov­er doesn’t make sense to me and I shuf­fle through to choose anoth­er title. Or the title might be sil­ly (in my mind) and I don’t open the book because some­thing else catch­es my inter­est. And then one day I open that book and I dis­cov­er that I shouldn’t judge a book by its cov­er. (Is there a truer truism?)

This time that book is World Piz­za. It’s going to be about the dif­fer­ent kinds of piz­za around the world, right? It is not. There’s a clever play on words in the title which I wouldn’t have dis­cov­ered if I hadn’t opened the book and read it. (Note to self: open the book and read it!)

You see, World Piz­za is a love­ly book. It’s a tiny bit sil­ly, enough to keep those being read to smil­ing, but it’s real­ly a book about peace (I can’t fig­ure out how to rec­om­mend this book with­out giv­ing that away). A moth­er makes a wish and sneezes, result­ing in piz­zas for every­one, every­where. It’s a book about what we have in com­mon and how that brings us togeth­er and how that’s more impor­tant than what keeps us apart.

Cece Meng’s sto­ry is told with the right kind of words, words that tell the sto­ry as it should be told, which are words that get the read­er think­ing. And smil­ing. They are not preachy words. Not at all. It’s a hap­py book and we all need hap­py books.

Ellen Shi’s illus­tra­tions of a diverse pop­u­la­tion of char­ac­ters around the world eat­ing and cel­e­brat­ing piz­za, as well as piz­za com­bi­na­tions you’ve nev­er con­sid­ered before, open the reader’s mind to all the pos­si­bil­i­ties of World Piz­za. They are some­times fun­ny and some­times gen­tle in all the right ways, cre­at­ing a sto­ry that leaves an impres­sion. And her col­or palette is yummy.

Swerving Over the Line
Following The Ducklings

One Response to The Best Wish of All