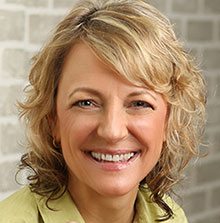 In this inter­view with Aimée Bis­sonette, author of Miss Col­fax’s Light, our Book­storm™ this month, we asked about writ­ing and research­ing this non­fic­tion pic­ture book biography.

Aimée, thank you for shar­ing your expe­ri­ences and dis­cov­er­ies with our read­ers. We’re excit­ed about this book that show­cas­es an Every­day Hero, one of Amer­i­ca’s female light­house keepers. 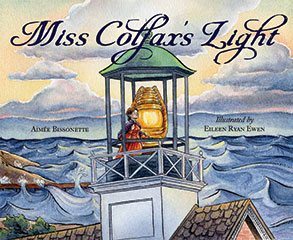 When you were writing this book, do you remember editing to include fewer details so the illustrator could do her work?

Yes, indeed! In fact, that’s half the joy of writing picture books — knowing the illustrator will fill in so many details. Eileen Ryan Ewen’s  illustrations in this book provide wonderful factual material. Harriet’s clothing and household items in the book are just like the things Harriet would have worn and owned in the late 1800’s. I did not need to include descriptions in the text. Eileen included so much historical detail in her illustrations.

How did you learn that some people in the city felt Harriet “got her job only because her cousin was a U.S. Congressman”?

In writing the book, I did a lot of research. There were several written accounts of Harriet’s life and the docents at the Lighthouse Museum had a treasure trove of information about Harriet. My favorite source of information was Harriet herself. She kept a daily journal, called a log, starting in the 1870’s. The idea that Harriet’s cousin, Schuyler Colfax, a U.S. Congressman who later became Vice President of the United States, helped Harriet get her job was mentioned frequently in my sources. Specifically, it is mentioned in a 1904 Chicago Tribune newspaper article by a reporter who interviewed Harriet right before she retired.

There are short segments of entries from Harriet’s journal included throughout the book. Did you have to get permission to use those? How did you know who to ask?

Those short segments are entries from the “log” I mentioned above. Harriet maintained that log as part of her official lighthouse keeper duties so the log technically is “owned” by the U.S. Government. Her log is kept in the National Archives. I did not need to get permission to use it because it is not protected by copyright. Keep in mind, though, much of the material a writer uncovers while doing research for a nonfiction book is protected by copyright. Writers need to be aware of this and ask permission when they use other people’s copyrighted work in the books they write.

Other than “I can do this,” there is no dialogue in the book. Why did you choose to leave out dialogue?

That’s a good question! I think the main reason is that, although I had Harriet’s log entries and her letters and I had a sense of what she might say and how she might say it, I didn’t know exactly what she would have said in a conversation. I felt if I made up dialogue, it would take away from the factual accuracy of the book. We can’t even be 100% certain that Harriet would have thought or said “I can do this.” But given all I learned about Harriet — her drive, her intelligence, the hardships she faced — I felt it fit and I allowed that one exception.

What do you want readers to know that they didn’t know before from the text you wrote?

I want readers to think about Harriet and others like her — the everyday heroes whose work makes life better for all of us. We don’t often think of lighthouse keepers as “heroes,” but the work Harriet did was critical to sea captains and sailors and the people of Indiana who depended on the goods brought in by ship. I also want readers to think about how Harriet and many other women of that time defied the restrictions placed on women and did incredible things — all without the cool technology we have today.

Would you have chosen to do Harriet’s job if you were alive then?

I like to think that I would have, yes. I think there is a little bit of me in Harriet. Like Harriet, I love a good challenge!

Aimée Bissonette was born in Pennsylvania, the sixth of seven children. Growing up, she moved many times, which led to a love of travel and storytelling. Aimée lives in Minneapolis with her husband and dog. Her 2020 picture books include Do Not Rake Your Garden in a Party Dress (Cameron 2020) and When Winter Comes (Sasquatch Press 2020) and The Tinaja Tonight (Albert Whitman, 2020). To learn more about Aimée and her work, please visit her website.

This sounds like a fas­ci­nat­ing story…and how for­tu­nate to have Har­ri­et’s own log to draw upon. It’s a good case for keep­ing a journal/log even today!