Bookol­o­gy is proud to fea­ture Gen­nifer Chold­enko’s Chas­ing Secrets as its Book­storm™ this month, shar­ing themes, ideas, and com­ple­men­tary book rec­om­men­da­tions for your class­room, lit­er­a­ture cir­cle, or book group discussions. 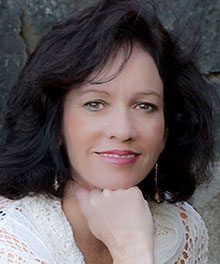 Were you a curious child? How did this manifest itself?

I was an eccentric child. I was curious to the extent that I could find out new facts to feed my imaginary world. I adored school and loved my teachers. I used to come home from school with an aching arm from raising my hand with such unbridled enthusiasm.

When you grew up, where did your curiosity lead you?

You know the classic I Love Lucy episode with the candy conveyor belt? I once had a job squishing individual servings of tomato ketchup and mustard with a big mallet. The goal, believe it or not, was quality control. You had to bang them hard. If they didn’t open, they were considered secure enough to send out. Boy was it a messy job. 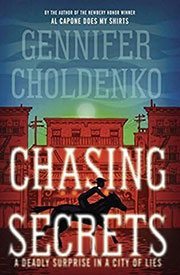 Lizzie Kennedy, the heroine of Chasing Secrets, is a curious child of thirteen. She’s interested in science and mathematics, in finding out the truth. What do you admire most about her?

I admire how certain she is about the rightness of the world. I’ve had people tell me that Lizzie reveals her naivete because she’s so sure she can make everything work out. That gave me pause. In Lizzie’s worldview, the truth prevails. I believe that to my very core. Maybe, that’s why I write for ten-, eleven- and twelve-year-olds.

Jing and Noah are Chinese immigrants. Only part of their family has traveled to San Francisco. Jing has aspirations for his son. What drew you to writing these characters into the book?

I’m interested in the Chinese, in part, because my daughter is Chinese. We adopted her from China when she was eight months old. She was a very small immigrant. And not surprisingly, I adore her. Because of her I’ve become more aware of the anti-Chinese sentiment in today’s world and that in turn made me more interested in the history of the Chinese in America.

You introduce the key players in the story in the early chapters. We even get a glimpse of Billy on the docks, long before he interacts with Lizzie. The rats have Chapter 3 named after them. Is this something that happens as you’re writing the first drafts, or do you go back to set up the story during revisions?

Every book seems to evolve in a different way. Chasing Secrets was built almost entirely in revision. The only part of the book that was there from the get-go involved the rats. Billy evolved with each draft. It took me a long time to persuade him to come onto the page.

The number “6” figures prominently in Chasing Secrets. There are Six Companies, Six Leaders, and Six Boys. What is the significance of the number 6 for you?

The Six Companies actually existed. They held considerable power within the Chinese community. The Six Companies reminded me of my brother’s group of friends who all lived in a house in Marblehead and called themselves “Six of Six.” That gave me the idea it would be fun to have Noah be a part of a group of six kids who were leaders in the kids Chinatown community.

There’s an exchange between Lizzie and Noah where we discover that each of them has prejudices. Lizzie has her notions about servants and the Chinese, but Noah has his ideas about girls not being as smart as boys. He believes girls lie because one girl did. This feels like an important passage in the book. Why did you include it?

If you are writing about San Francisco 1900 and every character has the sensibility and mindset of San Francisco 2016, then really what you’re doing is putting your twenty-first century characters into historic dress. A costume ball is fun but it isn’t historic fiction. On the other hand, there is no such thing as a generic 1900s sensibility anymore than there is a generic 2016 sensibility. (Does Pope Francis view our world in the same way as Lady Gaga? I don’t think so.) There always have been, and there always will be, people who are “ahead of their time,” people who are “behind the times,” and people who are wholly original thinkers. But everyone is formed to some degree from the time in which they exist.

Lizzie was more open-mind­ed than most of her peers. But the prej­u­dice against the Chi­nese was deeply embed­ded in San Fran­cis­co cul­ture. Lizzie had to have absorbed some of it. And, of course, Noah’s world was sex­ist. Almost no one ques­tioned either of these prej­u­dices in 1900.

Did you have trouble deciding which of the main characters would get sick with the plague? 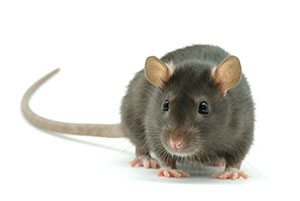 How did you know? I felt strongly that the person who got sick was not going to be Chinese only because many people believed that the plague only affected Asians, which was and is false. But whom should I choose? It was a ghoulish question.

It seemed log­i­cal that some­one like Mag­gy would get sick because she spent a lot of time clean­ing and there were an inor­di­nate amount of dead rats around in 1900, many of whom died of the plague. But I real­ly loved Mag­gy and I didn’t want her to suf­fer much less die. So ini­tial­ly I gave her a light dust­ing of the plague, from which she recov­ered pret­ty easily.

Then I got a let­ter from my edi­tor. She did not believe this was real­is­tic. I hap­pened to be on tour when I got the let­ter. I remem­ber wak­ing up one morn­ing in Nashville with the real­iza­tion that one char­ac­ter who I had mak­ing the “right” deci­sion would not have made that deci­sion at all. And from then on the book wrote itself.

There are many interesting real-life characters in your book (Dr. Kinyoun, Donaldina Cameron). Did you visit museums and libraries to do your research?

I spend half my life at the library. And of course I went to museums in San Francisco and in New York in addition to every historical tour I could find in San Francisco and Sacramento and in New York. Historical tours rarely give me a picture of the exact time, place, and social status I’m looking for, but they are a leaping-off place. I pepper the tour guides with questions and source materials and begin to develop a picture of what the homes of my characters might have looked like.

Anoth­er thing I love to do is walk the neigh­bor­hoods I’m writ­ing about. Of course, San Fran­cis­co now looks noth­ing like San Fran­cis­co in 1900 and yet some things are the same. Weath­er, prox­im­i­ty to the bay, seafood, wildlife, birds, nat­ur­al geog­ra­phy are all large­ly the same. I spent a lot of time in Chi­na­town. Chi­na­town now is almost noth­ing like it was, except for one thing: it still feels like its own city in the mid­dle of San Fran­cis­co. By walk­ing the city now and study­ing old maps and old pho­tos, I was able to con­jure up Chi­na­town in 1900.

Research is an ongo­ing detec­tive game. A syn­er­gy between what I can find out and what I can imag­ine. I research before I begin writ­ing, while I’m writ­ing, and while I’m revis­ing. My hus­band says when I’m in the mid­dle of a book I am pos­sessed. I can’t get enough infor­ma­tion. But I find the entire process thrilling. There is noth­ing like dis­cov­er­ing a juicy source that tells me exact­ly what I need to know.

Gus Trotter and his sister, Gemma, are intriguing friends who embrace Lizzie and her escapades. Were they in the story from the very beginning? 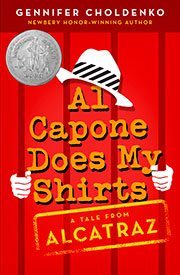 No! Gemma and Gus Trotter came later. In the beginning, Aunt Hortense and Uncle Karl had a daughter who was very close to Lizzie. But somewhere around the third draft I realized she got in the way of the story. So I kicked her out of the book and as soon as I did Gemma and Gus appeared. The same thing happened with Al Capone Does My Shirts. Initially, I had a different group of kids on the island. I liked them, but they didn’t work very well with Moose, so I fired them. And when I did up popped Jimmy, Theresa, and Annie.

Writ­ing a book is a bit like hav­ing a din­ner par­ty. I’ve had din­ner par­ties where I invit­ed guests I know and love but the din­ner par­ty didn’t quite work because the dynam­ic between the guests fell flat. And then there have been oth­er par­ties where the guests bounced off each oth­er and the cumu­la­tive effect was incred­i­ble. This is, of course, what I’m look­ing for when I audi­tion char­ac­ters for my novels.

Do you find it sad to say goodbye to your characters when you’ve finished writing the book?

Yes! I really loved the world of Chasing Secrets. I found it utterly fascinating. It takes a long time to develop a historical setting to the point that it becomes quite that believable to me. At first the details sit on the surface and then gradually, draft by draft, they sink into the core of the book. And when that happens I become so invested in that world that it is quite challenging to let go.

Thank you, Gen­nifer, for shar­ing your thoughts and writ­ing jour­ney with us.

For use with your stu­dents, Gen­nifer­’s web­site includes A Writ­ing Time­line, a series of videos and pod­casts about Chas­ing Secrets.

Hi Gen­nifer, I’m a huge fan of your books, and as a for­mer school librar­i­an I also enjoyed rec­om­mend­ing them to my stu­dents. Years ago I heard you speak at the St. Pete Times Read­ing Fes­ti­val. I loved hear­ing the details of your writ­ing life and your research process.  I’m real­ly excit­ed to read your newest book. I have a spe­cial inter­est in Chi­na for the same rea­son you do — I also have a daugh­ter from Chi­na. We adopt­ed her when she was 10 months, and she is now 13. Not sure where the time has gone.  I’m also a mid­dle grade author, and my lat­est book, JUST LIKE ME, will be… Read more »

Anoth­er adopt­ed daugh­ter from Chi­na! That is so nice to hear. Chi­nese girls are the best!

I’d love to see your new book. Do send me an email at: Gennifer@Choldenko.com. And thanks for remem­ber­ing the St. Pete Times Read­ing Fes­ti­val. That was such a great event!

Hi David, It’s great to hear from you! I always check into your Face­book page in Octo­ber, but clear­ly I need to check in more often. Con­grats on all your new books!

I’m excit­ed to read anoth­er Gen­nifer Chold­enko book! Your Al Capone books brought Ala­ca­traz to life for me (and how excit­ing it was to actu­al­ly vis­it Alca­traz after hav­ing read Al Capon Does My Shirts!). I was just in Chi­na­town this past fall, so I’m look­ing for­ward to look­ing back in time on an area I’ve just visited.

Rumor has it, you’re com­ing to Flori­da SCBWI this win­ter! Hope to final­ly meet you. Love this interview.