I’m so pleased to have Gen­nifer Chold­enko grant Bookol­o­gy an inter­view about all the ques­tions I’ve bot­tled up since read­ing Orphan Eleven, her newest nov­el. Each one of her nov­els is a page-turn­er from first to last, often intro­duc­ing his­to­ry we didn’t know but can’t wait to learn more about. Those are my favorite sorts of books.

How do you recognize when a plausible idea for a book first comes to you?

“Plausible” you say? Oh my gosh that is funny. The longer I am in this business the more I see how difficult it is to recognize a really good idea or even a plausible one. In other words … I have no clue which ideas have legs and which don’t. I sometimes spend months researching, before I know if an idea is worth pursuing. Certainly not an efficient process. On the good news side: because I have spent so many years cultivating my writing skills, I can write a book about almost anything. The question is … should I? Is the idea worth that time and effort? I am working on a novel right now that I thought was a decent idea … no great shakes. But when I started working on it, it burst to life in a totally unexpected way. Now I see it was a really great idea, but how was I to know that when it first jumped into my brain? So yes, figuring out which ideas to dedicate my time to is a tricky business.

How do you record the idea so you won’t forget?

Well technically speaking, I have multiple journals. One on my bedside table, one in my handbag, one in my tennis bag, one on my desk. And yes, I wake up in the middle of the night with ideas. I pull the car off the freeway to scribble down an idea. I put my hands over my ears and say: wait, wait, wait hold that thought, I have to write this down. 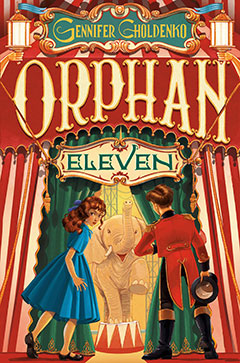 Often a book idea comes from a fas­ci­nat­ing piece of his­to­ry … like the fact that kids grew up on Alca­traz when it was a work­ing pen­i­ten­tiary. With Orphan Eleven, I was research­ing anoth­er nov­el. I had devel­oped two char­ac­ters for that nov­el. One of the char­ac­ters refused to speak and I could not fig­ure out why. I tried dozens of back­sto­ries on her. Noth­ing worked. It was as if she were say­ing: “No, that’s not why. No, no, no.” But I loved the char­ac­ter. I had this gut instinct that her sto­ry had to be told. But what was it? I didn’t know. So I back­burnered the entire nov­el. A year or two lat­er, I hap­pened upon a non­fic­tion book which described a study on stut­ter­ing con­duct­ed on orphans in 1939. As soon as I read that page, I knew why Lucy, my pro­tag­o­nist, would not speak. So I changed the date of the nov­el and almost every­thing else about it, and out popped Orphan Eleven.

Do characters spring to mind at this point or does that happen later in the writing process?

It really depends. Sometimes characters arrive early in the research. Sometimes quite late. In my view, characters are everything. You can have a terrific subject and a thrilling plot, but if your characters fall flat, who cares? So I spend really a long time developing my characters. I love writers who spend the time to make every single character pop off the page. Even walk-ons. That is my aspiration for every book.

Do you have a ritual for beginning a new book?

Every novel takes a different road. Sometimes characters come first and the goal is to figure out that character’s story. Sometimes the setting comes first (Alcatraz Island for example) and then I must figure out the character and story for that setting. So, no rituals at the start of a new book. With every book, I am a “first-time” novelist—because that book has not been written before.

Orphanages fascinate me. I think they fascinate a lot of people. There were a lot of topics to research for Orphan Eleven: 1939, Circuses in 1939, Sewing shops in Chicago, Chicago in 1939, the history of elephants in the circus, Winter Quarters for circuses, elephants, elephant training, stuttering, the 1939 study which became known as “the Monster Study,” etc. Somehow researching orphanages was way down the list, so I had already begun writing the novel when I began researching orphanages. You can imagine my excitement when I discovered a treasure trove of material about the Soldiers’ Orphans’ Home—the actual orphanage that provided orphans for the stuttering study. And then I visited the site of the Soldiers’ Orphans’ Home in Davenport, Iowa. That was pretty terrific, too. The truth is way better than what I make up.

When you’re writing a novel, do you purposefully include different plots within the book? How do you decide how many subplots you need? Do you look for a balance among the plots?

Great question. I often wonder how other authors develop subplots. For me, I don’t start out with subplots. But as the story unfolds subplots evolve organically. I generally ax subplots that don’t weave back into the main plot. But I like to develop several climaxes. A subplot’s climax can help create tension and excitement leading up to the main plot climax. In the case of Orphan Eleven, I had 4 orphans (Lucy, Nico, Eugene, and Bald Doris) who ran away from the Home for Friendless Children. And I really wanted the reader to feel as if they live inside of each of the four orphans. In fact, I got so into these characters that I began to imagine a second book. One about Bald Doris from the point of view of Eugene. Maybe I’ll get to write that book someday. 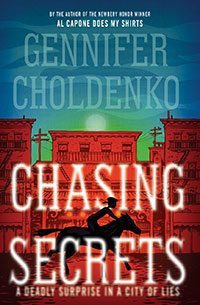 Finally, I’ve been thinking about all the parallels between Covid-19 and the bubonic plague in your novel Chasing Secrets. Did you suspect how relevant this book would be when you were writing it?

I was totally blindsided by how similar the Covid crisis is to what happened in San Francisco in 1900. In 1900: denial about the very existence of the disease was widespread. The Chinese were blamed for the virus. Racially charged violence occurred. Quarantines were announced. People lied about whether or not they had the disease. Doctors lied about it too. There was huge doubt about the effectiveness of the vaccines. The rich got better treatment. The rich got better vaccines. Any of this sounding familiar?

A fas­ci­nat­ing inter­view with one of my favorite authors. Thank you, Vic­ki and Gennifer!

I could­n’t get writ­ing advice from a bet­ter writer. Thank you, Gen­nifer and Vicki..