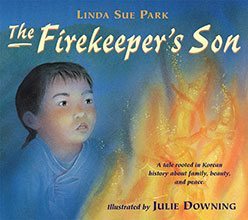 How do you begin the research for a story set long ago?

I go to the library. I live in New York state, which has a wonderful interlibrary loan system. My local library can get me books from anywhere in the state. Many of my sources have come from the East Asian collections of university libraries.

The Firekeeper’s Son is set, according to the Library of Congress data on the copyright page, in the early 19th century. Did you choose that time because you could verify the fires were in use as a signal system (as mentioned in your author’s note)? Because it was a time of peace, which was crucial to Sang-hee’s longing to see soldiers?

Both. I read about the signal system in a traveler’s account of 19th century Korea, and I also chose that time frame because there was no war.

This picture book was published after you'd written four novels. How much paring down of the story and text did you have to do from the first draft?

Actually, I started my writing life as a poet. I’ve written poetry since I was a child, and published poetry as an adult long before I became a fiction writer. Good picture-book text is a kissin’ cousin of poetry. So when I wrote the book, it felt like ‘coming home’ to me.

I did end up cut­ting words from the orig­i­nal draft; I can’t recall the exact num­ber, but it wasn’t dras­tic. As I implied above, I approached the man­u­script wear­ing my ‘poet­ry’ hat, not my ‘nov­el’ one!

How did you decide on the critical element of tension within the book?

In every story I write, the character has to face a problem, make a decision, and act on that decision. Picture books that tell stories aren’t exempt from this structure. So I knew I wanted to put Sang-hee in a position where he would have to make a difficult decision: one where he would have to choose between his own desires and what he knew was the right thing to do. Even quite young children face this kind of dilemma in their own lives—I know I’m not supposed to throw this valuable breakable figurine but I really really want to—so I was confident that it would work in a picture book.

You have traveled to Korea several times. Do you feel that Julie Downing, your illustrator, captured the land that you know?

Korea has of course changed dramatically in many ways since the 19th century, especially in the cities. I haven’t been able to visit the countryside as much as I would like. But the mountains and the sea are forever—at least I hope so—and I think Julie did a terrific job there. I also love her depiction of Sang-hee’s village. 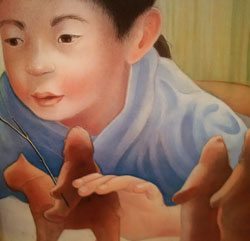 The toy figures Sang-hee plays with are a crucial element in the narrative, yet they’re not mentioned in the text. When and how did they become part of the story?

I was absolutely delighted to see the toy figures in the illustrations. They were entirely Julie’s idea, and a perfect way to show Sang-hee’s keen interest in soldiers. I love how she brought her own vision to the story. That sort of detail is what makes a picture book a true collaboration.

Why was it important to you to tell this story?

I think many of us feel that history is something that happens outside of our own experiences—to famous people, as a result of momentous or turbulent events. But history is happening all around us, all the time, and each one of us is participating, even if we don’t think we are! In all my historical fiction, including this book, I want to explore how ordinary people are part of shaping history. And of course I’m always interested in learning more about Korea, where my family comes from. For me, writing is a way of learning.