Mar­i­on Dane Bauer and her books are respect­ed and loved by chil­dren, par­ents, edu­ca­tors, librar­i­ans, edi­tors, and writ­ers. She began her career as a nov­el­ist, turn­ing to pic­ture books lat­er in her career. Cel­e­brat­ing the release of her newest pic­ture book, the charm­ing Win­ter Dance, we were curi­ous about how she writes these short books so we asked! And this long-time teacher of oth­er writ­ers pro­vid­ed heart­felt answers. 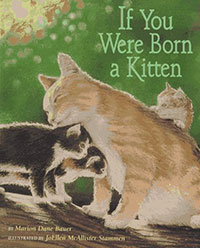 When you sit down to write a picture book, what has inspired you?

Sometimes I begin with an idea I want to share.  If You Were Born a Kitten, for instance, comes out of my very impassioned belief that the miracle of birth is hidden from most young children in our society—from most of us, really.  I wanted to celebrate birth in a way that would show it both as miracle and as part of our solid, everyday reality.

Some­times the con­cept comes from some­thing I read or some­thing some­one says to me. Win­ter Dance came from an editor’s say­ing, “What about cel­e­brat­ing the first snow?”

But the actu­al pic­ture book begins, always, with lan­guage.  I can’t even begin to flesh out my idea until the open­ing line is singing in my head. 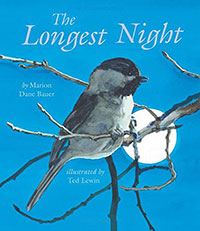 Do you know the ending of your picture book before you begin to write?

I always know the end of a novel before I begin to write, and if a picture book is a story, I know the end of that, too. So when I began writing The Longest Night, I knew before I put down the first word that the little chickadee would bring back the sun. When I write concept books, though, like How Do I Love You?, I have to find my ending in the playing out of the language.

Do you write with a specific child in mind?

I write always for a child, and in the case of picture books for the adult who will be sharing the book, but I have no particular child in my heart … except maybe the small child I was so many years ago.

Do you envision the illustrations while you are writing?

How much do you consider the level of the reader’s vocabulary when you write a picture book?

Honestly? Not at all. Because picture books are usually read to a child rather than by the child, I never consider vocabulary. Sometimes a totally new word is, in itself, a kind of enchantment for a child. Think of Peter Rabbit for whom lettuce had a “soporific” effect! No, I’ve never used the word soporific or anything like it, but isn’t it a wonderfully resonant word?

I should add, though, that there is one basic rule I use with all of my writ­ing.  I believe the best word in any piece of writ­ing for any audi­ence is always the sim­plest one.  Some­times, though, that best word might just hap­pen to be soporific. 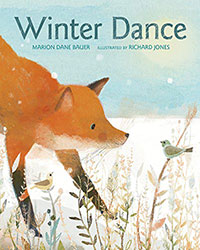 Do you ever begin a picture book feeling at a loss for how to write it?

Win­ter Dance, my newest pic­ture book, actu­al­ly began with an editor’s com­mit­ting to a pic­ture book I had writ­ten about spring.  For a com­pli­cat­ed series of rea­sons the text the edi­tor con­tract­ed had to be altered sub­stan­tial­ly, and dur­ing that process, my drafts got far­ther and far­ther away from any­thing the edi­tor want­ed.  I men­tioned ear­li­er, it was the edi­tor who final­ly came up with the idea that I write about the first snow instead.  Great idea, but first I had to find my fox, and I had to dis­cov­er that fox­es mate in win­ter so he would have a rea­son to rejoice over snow.  And then, of course, I had to find the song to car­ry him through.

What is the word length you aim for in a picture book?

A maximum of 450 words.  Even that can be too long for some books.

You were best known for your novels for middle grade and teen readers. What influenced you to try a different book form for a different reader?

The truth is I always wanted to write picture books. In the beginning, I simply didn’t know how to write them, even though I had read them endlessly to my own children and to various foster children in my home. Picture books are a bit technical to learn, and I had no one to teach me. In fact, I started out trying to write picture books and discovered I didn’t know what I was doing. So I moved on and found it easier, not knowing what I was doing, to muddle through a novel.

The oth­er piece, though, was that my first edi­tor, at a time when we  writ­ers were owned by our first edi­tors, said to me when I showed him what I thought was a pic­ture-book man­u­script, “Mar­i­on, you are not a pic­ture book writer.” Now, he could legit­i­mate­ly have said, “Mar­i­on, that’s not a pic­ture book.” Because it wasn’t. But even when the pub­lish­ing world opened up and I did learn and began pub­lish­ing suc­cess­ful pic­ture books with oth­er hous­es, he refused to alter his vision of me as only a nov­el­ist. So I have him to thank for my career get­ting estab­lished in nov­els. Pic­ture books are so much fun, if he had been open to younger work from me, I prob­a­bly would have been off play­ing with pic­ture books much sooner.

Thank you, Mar­i­on, for shar­ing your thoughts about pic­ture books in such an instruc­tive way. We’re always hap­py to learn from you.