Our Book­storm this month fea­tures Giant Pump­kin Suite, the first nov­el from Melanie Heuis­er Hill (Can­dlewick Press). Often called debut authors, a first-time author is intrigu­ing for a read­er. Is this some­one we’ll look for­ward to read­ing for many years to come? How will this author grow as they become more expe­ri­enced at craft­ing a sto­ry with char­ac­ter, action, and plot? We avid­ly pick up a brand new author’s book with great hopes. Once you fin­ish the sto­ry of Rose and Thomas Bruti­gan, I think you’ll wish you had Melanie’s next book to open up right away. It won’t hap­pen like that  (we can read faster than they can write!) but it’s our priv­i­lege to hear from Melanie at the very begin­ning of her career.

When do you first remember being excited about writing?

In kindergarten. We had a special over-sized book for each letter of the alphabet. The books were the size and shape of record album (LP) covers. On the cover of each book was a capital letter and a small letter—the capital letter was three to four inches in size. There was also a picture of something that started with the letter—I especially remember the O book with its octopus.

The let­ters were tex­tured — this is bril­liant, I think. I knew how to make all my let­ters when I start­ed kinder­garten, I believe, but I delight­ed in the exer­cise of trac­ing those sandpaper/fuzzy/dotted/slick let­ters with my fin­ger each day. I was very pre­cise in this trac­ing, believ­ing I might be able to speed up the writ­ing process and get to the actu­al writ­ing of the let­ters if I did the pre-emp­tive prac­tice as well as I could.

When I grad­u­at­ed to writ­ing the let­ters them­selves on paper with a pen­cil — long rows of O’s across green, yel­low, and red lines that matched the stop­light at the begin­ning of the writ­ing page — I could “feel” the tex­ture of the let­ter through my pen­cil even as I was just writ­ing on paper. I found this thrilling and mys­te­ri­ous. I still think writ­ing is thrilling and mysterious. 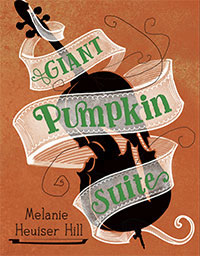 Did you talk about writing with your siblings or friends or parents?

I remember confessing to my best friend in fifth grade that I hoped to be a writer some day. It felt very much like a confession—like it wasn’t quite right that I wanted to do this. I don’t know why. Nobody used pejorative language about writers in my sphere. In fact, I received great feedback all the way through school—elementary through grad school—about my writing, creative and otherwise. But it didn’t feel like something I could do as a grown-up career. I’m not sure it does quite yet! But now it doesn’t feel like a confession, more like a determined mantra, filled with hope and a little nervousness: I am a writer!

Did you go through phases in your writing as a young writer? (horses, elves, princesses)

I went through a horse phase in reading, but I’ve never written anything with horses in it except for maybe a book report somewhere along the line. I don’t think I’ve had any “phases” creatively. There were years when I wrote critical/academic papers, of course, but that was just how the assignments came. Often I did something more creative with those dry topics, as well, which my professors seemed to appreciate.

You have several degrees ahead of your MFA in writing for children and young adults from Hamline University. How do you believe having a broad education has influenced your writing?

I went to Concordia College in Moorhead, Minnesota, a small liberal arts college. I think the emphasis on liberal arts encountered there more than anything (besides being a bookworm) has influenced my writing. I enjoy taking disparate subjects and putting them together—giant pumpkins and Bach’s Cello Suites, for instance, with a dash of Japanese history, a shake of tap dance, and a sprinkling of musicals. I am a master at none of these subjects, but I have curiosity, research skills, and an ability to see the likeness in things that seem so very different. I think liberal arts study was a foundation of that.

I have two mas­ters degrees — both heavy in read­ing and writ­ing. Grad­u­ate school takes time and dis­ci­pline. I’ve learned from some of the very best — and to have had those years with top writ­ers and schol­ars cri­tiquing my work … well, that’s invalu­able for any writer, I think.

I believe you have many interests after reading Great Pumpkin Suite. How does this work? Do you explore your interests and decide how they will work into your book? Or do your characters tell you which interests they have?

I do have many interests. We hear a lot that we should “write what we know,” but I find it more interesting to write what I want to know. I was super fascinated by giant pumpkins when I first heard about them. I’ve been in love with Bach’s Cello Suites for decades. I intentionally decided to put them together, different as they are, and as I researched those two topics, the characters were born. The novel I’m working on now is unfolding in a similar way. I love learning about new things and characters are the easy part for me—plot is what is hard!

A theme of Great Pumpkin Suite is competition. Rose is competing musically and her twin, Thomas, is soon competing in something far different, growing giant pumpkins. What is it about competing that intrigues you enough to make it a part of your plot?

Competitions by their very nature present a clear goal—to win. I needed an answer to the question “What does Rose want?” Once I put the Bach Cello Suites Competition in place, the answer was clear. She wanted to win the competition so she could study with Harris Waldenstein.

Thomas, on the oth­er hand, was sim­ply into the process of grow­ing the giant pump­kin. He seem­ing­ly did not have a com­pet­i­tive bone in his body…until he found out there was a com­pe­ti­tion. Then he, too, had a goal. Putting a cou­ple of com­pe­ti­tions in the book helped me fig­ure out how to move things for­ward — I’m not sure much would’ve hap­pened with­out them!

You just had your first book published and you’re working on a second novel. Is developing a plot and figuring out characters hard work for you?

Plot is hard for me—I can write chapter after chapter with intriguing characters doing absolutely nothing. In the early stages when I tell a willing listener (teacher, agent, editor, writing friend) what my book is about, I’ll go on and on about the characters and the setting etc. and they invariably have to interrupt and say, “Yes, but what happens?” I love thinking about characters. I could spend years dreaming up eccentric characters—especially the side or minor characters. My imagination just glories in that task. But plot … that’s more difficult.

You write the Red Reading Boots column for Bookology magazine. Why do you believe so strongly in writing for children?

Because I believe so strongly in reading to children. I was such a reader as a kid—such a reader. Books were an enormous part of my childhood. And when I look back over the raising of my own two kids, I can say, without equivocation or question, that I’ve done well in one area: reading to them. Some of the rest of the parenting might be up for question, but the reading thing got done right. Books have been and continue to be an important part of our family life.

Now that they’re old­er, we read along­side each oth­er and share books, etc., more than we read togeth­er, but it’s still a bond, a shared love. The old­er they get, the more I miss the snug­gles on the couch with a shared book, and the hap­pi­er I am that we had so many years of it.

One of my favorite things in the whole world to do is read with chil­dren. It astounds me to think I now have the hon­or of writ­ing for them.

Melanie, we know you’re very busy spread­ing the news about Giant Pump­kin Suite. Thank you for shar­ing your thoughts with our read­ers, many of whom we expect will become your read­ers. You’ve been writ­ing the Red Read­ing Boots col­umn for Bookol­o­gy for three years. It’s one of our most-read columns. We love how much you love shar­ing read­ing with young peo­ple and the adults who want to place great books in their hands.

Your new book sounds per­fect for this time of year, Melanie! And how won­der­ful that you are now spread­ing the joy of read­ing through the books that you’ve written.