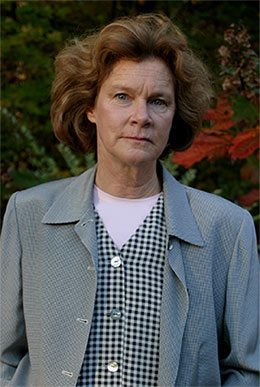 I read about it on a blog or the Internet, I can’t remember. I try to keep abreast of what six-year-olds are doing by talking to my nieces, who have little girls, or friends who do, or the children on the street where we live – anywhere I can find information.

How do you maintain your sense of what a first grader thinks about, feels, and worries about?

When I was writing the books, I didn’t think about that. Posey got under my skin and I was able to convey the feelings and indignations and concerns of a little girl her age. But now that you ask and I look back, I think she’s probably a bit like me at that age. I’m glad I didn’t realize it at the time because I find it impossible to write if I think that who I’m writing about is myself. My mother once said I was always well-intentioned as a child and I think Posey is, too. I guess I unconsciously pulled on the often conflicted feelings of having four siblings, too. They’re the universal emotions of children.

Do you find yourself writing words, actions, concerns, and then checking with “authorities” to see if your writing is age-accurate?

No. I come up with the central concept and write it. My editor offers her opinion, of course, and sometimes questions what I’ve had Posey say or do. Together, we iron out anything that doesn’t feel authentic.

Did you keep a journal when your own child was this age … or when you were this age?

No, but I sure wish I had. I did jot down things my son said (and have used almost all of them in other books), but I never kept a journal when I was a kid. I didn’t dare – having read my older sister’s diary on a regular basis, I knew one of my siblings was bound to read mine.

You’ve written about an elementary-school boy, Owen Foote, and a middle school girl, Sophie Hartley, and the primary-school-aged Posey. From where do you draw your information about what’s a part of these children’s lives at different ages? 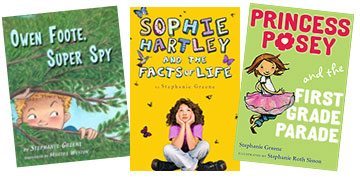 Many things have led to what I’m proud to think are books that reflect the authentic lives of children at whatever age I’ve chosen. For starters, I remember a lot of the events and emotions of my own childhood. I’ve also spent many years as a volunteer in schools to keep abreast of what’s going on. And I spy and eavesdrop incessantly on children to this day – my own and others wherever I see them. I have a constant antenna out to see what’s going on in the world as it pertains to children. Everything in life is fodder to an author.

Your books read as contemporary fiction. Are you concerned about adding in cell phones and computers and video games?

Yes. Not computers and videos games, as much, because I can have a character sit down with one of those as part of a larger scene without having to go into detail as to what they’re doing. But cell phones? I only used those in one Sophie Hartley book and I kept their presence short. (Thad broke up with his girlfriend via a text, which I know kids do. Nora longed for one.) As an adult who sees more and more children texting and watching things on their cell phones when they’re with one another, or should be looking at the world around them, cell phones distress me. They have an adverse effect on young people’s ability to relate to one another or even hold a conversation. So far, I haven’t wanted to be party to that. Should I come up with an idea in which a cell phone played a crucial role …? I guess I’ll wait and see what I do with that.

Reading a Posey book on their own is comfortable for readers ages 5 to 7, depending on their reading skill. Do you think about the words you’re using when you write for these readers?

Not really, no. I write them using the language Posey and her friends use. If I’d made Posey ten, the books would have been written differently. The age of the protagonist determines the language.

Your mother, Constance C. Greene, wrote A Girl Called Al, which is a humorous book written for what we then called young adults, as well as the other books in that series. She also wrote a book about grief and sorrow called Beat the Turtle Drum that moved many readers. When you were growing up, were you aware of what your mother did for a living? Did she involve you in any way? 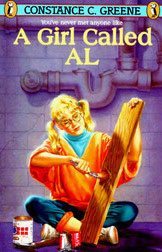 My mother sold A Girl Called Al when I was a junior in high school. Before then, she wrote short stories for the New York Daily News and other newspapers, including a woman’s magazine in Scotland. She never directly involved any of us in her writing, but since she wrote on the dining room table, we were all aware of it. Writing was what she did. She was very good and she loved doing it, but she was matter-of-fact about it. All she ever did was caution me against ever showing my spouse anything I’d written – long before I started writing. Or was even dating.

At what age did you realize you wanted to write books for children … and why?

I guess I started when my son was little. Watching him with his friends was often hilarious. They were so absorbed by, and intent on, whatever it was they were doing. It wasn’t until the day I listened to Betsy Byars give an hilarious talk at an SCBWI conference, however, that I actually sat down and wrote. It was my first Owen Foote book and I was so inspired by her that I wrote it in one draft.

Here’s a tough question: how do you write a humorous book? What do you keep in mind?

As my editor Dinah Stevenson once said, “You can’t make kids laugh by saying something’s funny.” i.e., writing that a kid “cracked up” or “laughed so hard” when what made him/her do that isn’t very funny. Having kids doing awkward or embarrassing things is kind of a cheap trick (although farts and burps are helpful tools). As with all emotions, you have to earn a reader’s laughter. I think having a good sense of humor is important, or seeing the world in a humorous way, or having an ironic viewpoint about things. Writers who write humor well generally have a kind feeling for people, I think. The best humor isn’t mean-spirited. Plus that, children are basically funny. Their view of life is so untainted and they say what they mean. Sometimes the humor arises from the fact that what they’re trying to accomplish is completely at odds with the situation. If you can get inside their heads and put it on paper the way they see it, it can be funny.

In your daily life, would the people who know you think of you as funny?

Ha! That would depend on who they are and what their relation is to me. My friends consider me funny, I think, but I’ve been told that people who don’t know me very well think I’m forbidding or remote. It’s not my fault. I have my father’s forehead – it’s perpetually furrowed.

Where do you write and what is your routine for writing? (Can you send a photo of your writing space?) 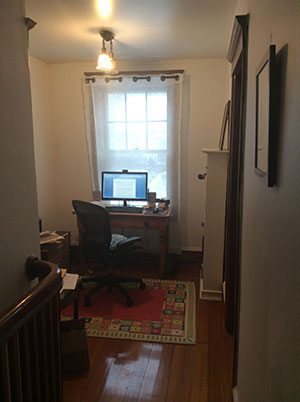 I write early in the morning. By about noon, I’m worn out and spend the afternoon doing other writing-related things. If I have several projects going at the same time, I might switch to one in a different genre. We’ve lived in several houses since I started writing, so my work area has changed. I’ve written in a tiny room off the laundry room, in the living room, in an extra bedroom, and now, in a small space at the end of our upstairs hall with a window overlooking the street. I’ve never had a formal office, per se. One place where I can’t work is in any public place.

Getting back to Posey, in particular, when you write a series, how do you keep your characters consistent?

I follow their lead. They become real people to me, so I put them in a certain situation, give them their heads, and watch what they do. As with people, they act in character most of the time. All I have to do is listen and write. I love writing character-driven books. Once I have internalized the character, he or she does most of the work.

Although this is a series, it is not presented in a “story arc” that requires reading the books in order. It’s helpful to start with Book No. 1, Princess Posey and the First Grade Parade, but otherwise the stories stand on their own. When you began writing Posey’s story did you make a decision to write in this particular way? Did you plan out what would happen over 10 books or did you think of her next story after you’d completed the first?

I wrote the first book as a one-off. The little girl was called Megan. It was prompted by the response I had to a sign I saw in front of a school. I never imagined in a million years that it would become a series. It was Susan Kochan, my editor at Putnam, who told me I’d created a “hook” in the pink tutu. She asked if I had any more ideas, so I thought for a bit, came up with a list of short scenarios, and she asked for three more. That’s the way the entire series has gone.

Do you have any fan mail about Posey to share with us? Something that particularly tickled or moved you?

Many of the letters and emails I get come from parents because their child is five or six. I got one from the mother of a boy with learning disabilities who loves Posey. She sent me a picture of him holding one. More recently, the mother of an eight-year-old girl with dyslexia wrote to tell me that her daughter hated reading before she discovered Posey, and that it makes her so happy to walk into the living room and see her daughter curled up on the couch with one of the books in the series. I’m thrilled to think that my books mean something to emerging readers, and that Posey becomes real to them so they care about her. Only when a book matters do children realize that books have something to offer them.

Stephanie, thank you sin­cere­ly for writ­ing the books you do. It’s so sat­is­fy­ing to have a series of books to rec­om­mend that you know will appeal to read­ers of this age, all the while mak­ing them laugh, and feed­ing their “need to read.”