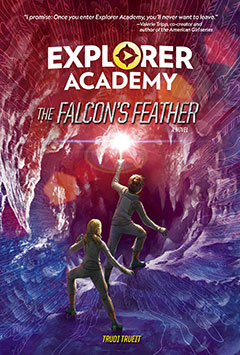 I’ve writ­ten a pri­or Read­ing Ahead essay about my love for The Neb­u­la Secret, the first book in the Explor­er Acad­e­my series. Now book two, The Fal­con’s Feath­er, con­tin­ues the sto­ry and I think it’s even more excit­ing. I can­not wait for the next install­ment in the series, The Dou­ble Helix, which won’t be avail­able until Sep­tem­ber 3, 2019. Do you remem­ber that kind of excite­ment as a young read­er, wait­ing for a book by your favorite author?

In this book, Cruz Coro­n­a­do, his friends and fel­low Explor­ers, Emmett, Sailor, and Brandys, and their entire class embark on The Ori­on, a superb high-tech­nol­o­gy ship that will vis­it var­i­ous trou­bled spots on the Earth, teach­ing the stu­dents about ecol­o­gy, con­ser­va­tion, sci­en­tif­ic inquiry, and involv­ing them in cur­rent exper­i­ments. A con­gru­ent sto­ry­line finds Cruz and his best friend in Hawaii, Lani, putting clues togeth­er that Cruz’s sci­en­tist moth­er left before she dis­ap­peared. It’s all very involv­ing, page-turn­ing, and will appeal to peo­ple who love mys­ter­ies, non­fic­tion, puz­zles, sci­ence, and Har­ry Potter.

I am so excit­ed by this book that I asked if I could inter­view the author, Tru­di Trueit. How on earth does she write a book, much less a sev­en-book series, of this cal­iber? Here’s how she answered me:

What’s in your background that prompted National Geographic to ask you to write The Explorer Academy series?

Many writers will tend to choose a genre, but I’ve always had a passion for writing both fiction and nonfiction. My work includes more than ninety nonfiction library titles for kids on everything from video gaming to storm chasing for publishers like Scholastic and Lerner. I’ve also written nine middle grade fiction titles, including the Secrets of a Lab Rat series for Simon & Schuster. I will go back and forth between the two genres, writing a fiction title, then writing a short series of nonfiction books. It’s the perfect mix. Just when I am eager to finish writing about a nonfiction topic, it’s time to switch and let my creative juices take over. Explorer Academy is a combination of those worlds, allowing me to create a fast-paced adventure series that’s rooted in science.

I recently saw you on WCCO in Minneapolis with Erika Bergman, submersible pilot, a National Geographic Explorer. When you’re writing each book in the series, do you pull the plot together with actual National Geographic projects as the basis for your scenes … or do you and your editor work out the projects to feature in each book?

The plots aren’t necessarily based on actual National Geographic projects, however, I do look to experiences from the explorers and real-world technology to enhance the storyline. Sometimes, a story is sparked by something an explorer shared with me, a project they are working on, or an article they wrote. Other times, it’s an issue that has touched my heart, like helping marine animals caught in fishing nets. I research and learn what we are (or aren’t) doing to address the problem and then create a mission for the explorers to go on.

Are you someone who enjoys puzzles and mysteries? Do you like to play games?

I adore games, puzzles, and mysteries! As a kid, one of my favorite books was called Two Minute Mysteries and it was exactly that: short stories where you had to figure out whodunit. I also devoured pretty much every Nancy Drew book out there (Hardy Boys, too!). I love games, too, especially word games and trivia.

Your plots are jam packed with adventures. How do you organize your plots, physically and mentally?

I try to keep things organized through an outline, scene list, and what I call Thread Notes. These are notes that I carry through from book to book, to remind me of the different threads that I have started so that I can decide when and how to wrap them up as the series progresses. For each book, I will do a general four to five page synopsis to establish the main plot elements and how I want it to end. I do try to keep as much in my head as possible, because if you’re expecting a reader to remember details as they read, it’s only fair that you do the same. I don’t do an extremely detailed outline because I find it tends to stifle creativity. Half the fun of getting up in the morning is seeing what will pour out of my head and onto the page!

My workspace is nothing fancy—my home office with a desk, bookshelf, and little floral sofa. The sage green walls are decorated with canvas prints of some of my book covers. It’s pretty neat, because I can’t write in chaos. I do have three editors, who see to it that I stay on track: my cats Pippin, Emmylou, and Woody. They snooze (and sometimes, snore) the day away next to my computer and occasionally steal my pens and pencils. Woody is a twenty-pound boy, so he takes a bit of room. I think I need a bigger desk! 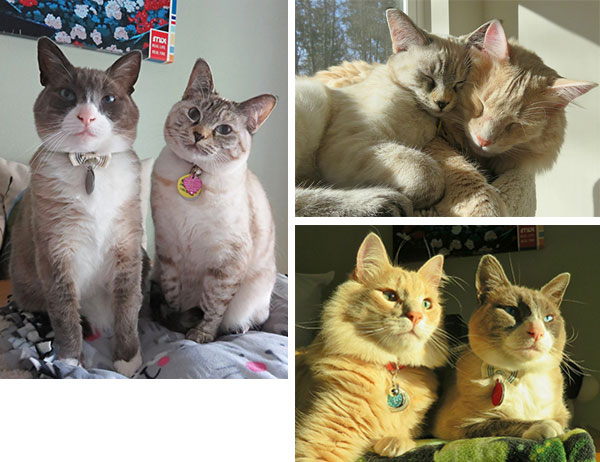 What are your five top go-to reference sites or reference books while you’re writing?

It varies, depending on the topic and book. Sources that I’ve looked to while writing Explorer Academy include The Smithsonian, National Oceanic and Atmospheric Administration (NOAA), U.S. Geological survey, NASA, NOVA, Scientific American, Discovery, and, of course, first and foremost, National Geographic.

The Orion Ship Map at the beginning of The Falcon’s Feather is one of the coolest things ever. Did you draw a version of that map to help you with writing the scenes on board The Orion?

Yes, I did a very basic version of the ship so I could visualize where everything was and keep track of things. Thankfully, talented artist Scott Plumbe took my crude drawing and crafted an incredible illustration for the book. I love its futuristic look!

You explain the gadgets so well. Are these scientific innovations something you’ve been able to see to help with describing them or are they fiction?

Some gadgets I have been able to see, such as miniature drones and smart glasses, but things like the time capsule, octopod, or shadow badge are fictional. Often, the gadgets are a combination of both. Because the explorers are living in the not-too-distant future, I will often take elements of the familiar and expand them via my imagination. For instance, the CAVE (Computer Animated Virtual Experience) is a virtual reality room, which we are all familiar with, that gives off an actual sensation when you touch an object, which is something that we are not familiar with – yet!

Taryn Secliff, the kids’ school resident assistant, has a Highland White Terrier named Hubbard, who’s affectionately regarded by Cruz, Emmett, and Bryndis. Do you have a pet?

Yes, I have three pets. I think you met them on my desk: Pippin (snowshoe), Woody (ginger tabby), and Emmylou (Siamese mix). They all get along great and are so much fun. Pippin has his own Facebook page, because you can never have too many cat pictures, right?

What’s your best hope for this series of books?

I hope that readers have as much fun reading Explorer Academy as I am having writing it (I’m writing Book Five in the series now!). It would be wonderful if some readers see themselves in its pages, perhaps, even discover a passion that leads to a career. More than anything, I hope the series spurs kids to participate and contribute, just the way the National Geographic explorers I have met seek to make a positive difference in the world.

Tru­di Trueit has writ­ten more than 100 books for young read­ers, both fic­tion and non­fic­tion. Her love of writ­ing began in fourth grade, when she wrote, direct­ed, and starred in her first play. She went on to be a TV news reporter and weath­er fore­cast­er, but she knew her call­ing was in writ­ing. Trueit is a gift­ed sto­ry­teller for mid­dle-grade audi­ences, and her fic­tion nov­els include The Sis­ter Solu­tion, Steal­ing Pop­u­lar, and the Secrets of a Lab Rat series. Her exper­tise in kids non­fic­tion encom­pass­es books on his­to­ry, weath­er, wildlife, and Earth sci­ence. She is the author of all the nar­ra­tives for the Explor­er Acad­e­my series, begin­ning with Explor­er Acad­e­my: The Neb­u­la Secret. Born and raised in the Pacif­ic North­west, Tru­di lives in Everett, Wash­ing­ton. Vis­it her web­site.