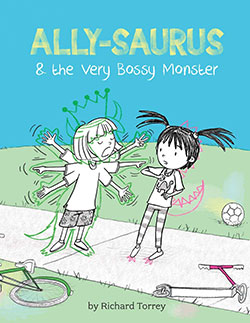 Each of us knows well the per­son we imag­ine our­selves to be. I’m guess­ing that this imag­i­nary per­son has changed shape and iden­ti­ty through­out your life. As a child, do you remem­ber your secret iden­ti­ty? Mine was a fear­less super­hero ver­sion of myself, because fear­less I was not.

If Richard Tor­rey had known that, he sure­ly would have drawn me a cape and mys­ti­cal arm­bands and a tiny crown with his tal­ent­ed, per­cep­tive vision and his oil-based pencils.

In his fol­low-up sto­ry after 2015’s Ally-Saurus & the First Day of School, Ally and her imag­i­nary Ally-saurus self return for a sto­ry about believ­ing in one’s self and stand­ing up for one’s beliefs. Ally, her neigh­bor­hood friend Kai, and her tod­dler broth­er, Petey, have a great time play­ing togeth­er with their imag­i­nary selves: a dinosaur, a famous tap dancer, and a bear. When a new girl moves in, she’s quick to take con­trol. Mad­die wants to make the rules. She decides they will play mon­sters. As kids will, Ally and Kai quick­ly adapt by mak­ing them­selves over as a dinosaur mon­ster and a tap-danc­ing mon­ster. But that’s not enough for Mad­die. She cre­ates lay­ers of rules so they can only play as she wish­es them to play. When Mad­die takes Petey’s ted­dy bear away, it’s the last straw  for Ally. She stands up to Queen Mad­die in a spec­tac­u­lar way.

The illus­tra­tions in this book are inte­gral to the sto­ry. With dark brown line draw­ings, col­ored with a soft palette of green, orange, and brown, this is a warm book, even when Mad­die is par­tic­u­lar­ly bossy.

Mr. Tor­rey uses a sketchy, col­ored line around each child (except Petey) to show us their imag­i­nary selves. He is very clever at using those same lines to show us how the chil­dren’s play sur­rounds them. Petey might be too young to have an imag­i­nary self. He and Bear seem to be the same per­sona. I’d like to think this is the author’s way of telling us that tod­dlers live in a place of imag­i­na­tion … they’re not yet pretending.

This is a sto­ry with a mes­sage that’s told in a sat­is­fy­ing, inte­grat­ed way. It’s a sto­ry about an all-too com­mon sit­u­a­tion among chil­dren at play. And it’s a sto­ry that offers encour­age­ment to STAND UP. You’ll want this on your book­shelf. It’s a sto­ry wor­thy of re-read­ing. And the illus­tra­tions are quirky and enchanting.