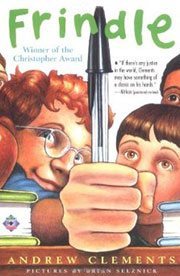 I con­fess to using books ther­a­peu­ti­cal­ly. When my kids were lit­tle and the day had gone wonky and none of us were at our best, a pile of pic­ture books was a sure-fire way to reset us all. It was part­ly the snug­gles, but most­ly the shared expe­ri­ence of read­ing the sto­ries we loved. As they’ve grown, I’ve been known to read them hap­py books when they are sad (and some­times sad books, just to help us lean into it) and sil­ly books when anger and tears have had their way with us. I’ve picked “top­i­cal” books when it seemed that approach­ing an issue at a “slant” might be the way to go.  And I’ve picked up books and insist­ed we read when I didn’t know what else to do.

Recent­ly, I heard Andrew Clements talk about his writ­ing life and his books at the Fes­ti­val of Faith & Writ­ing. I reread Frindle, my favorite of his books, on the plane on the way to the con­fer­ence. Pre­dictably, it made me cry, just as the flight atten­dant came by with pret­zels and juice. I was a lit­tle afraid Mr. Clements him­self would make me cry just by, you know, being up there on stage; but he talked about his child­hood and his ear­ly mar­ried years and find­ing his way as a writer…. And it was delight­ful! He was exact­ly as you expect­ed Andrew Clements to be while pre­sent­ing to a group of teach­ers, writ­ers, librar­i­ans, and read­ers (most­ly adults, some kids).

And then, at the end he rifled through some papers, say­ing he wasn’t sure if he’d talk about this next thing…. But he did. Or rather he read it. He’d been pre­sent­ing for an hour extem­po­ra­ne­ous­ly, but now his eyes were glued to the page and he read us pre­pared remarks. He wasn’t even a full sen­tence in before we under­stood why he was read­ing and not telling the sto­ry “off-the-cuff.”

Not long after the Decem­ber 2012 school shoot­ing at Sandy Hook Ele­men­tary in New­town, Con­necti­cut, Clements was con­tact­ed with a request he both could not refuse and could not imag­ine. While the world watched and prayed, the school and com­mu­ni­ty worked hard to piece togeth­er life for the kids, teach­ers and staff, and their fam­i­lies. Some­one float­ed the idea of an all-school read — some­thing for all ages, some­thing they might enjoy  togeth­er, some­thing besides the tragedy to help re-define them.

They chose Frindle. They asked Clements to come and so he and his wife went. He told us how he was led through the police check points in the park­ing lot and at the school doors…. How he was escort­ed into the school gath­er­ing by the library work­er who had shield­ed eigh­teen kids in a clos­et in the library dur­ing the shoot­ing…. How they explained the impor­tance of not mak­ing any loud nois­es or sud­den movements….

And then he read Frindle to those kids and teach­ers. He said he and his wife agreed it was one of the holi­est spaces and times they’d ever experienced.

There wasn’t, of course, a dry eye in the audi­to­ri­um. Those of us in the audi­ence could hard­ly breathe while he read this account. I can’t imag­ine the strength it must have tak­en for this beloved author to read his work to those chil­dren and their teach­ers. Such an hon­or, such a privilege.

Books can be so ther­a­peu­tic — and the read­ing of them togeth­er even more so. I think the idea of an all-school read at Sandy Hook Ele­men­tary was bril­liant, the choice of book and author inspired. Read your way into some holi­ness with a kid (or a whole group of them) today if you can. When­ev­er and wher­ev­er we can gath­er over books…holy time and space is found.