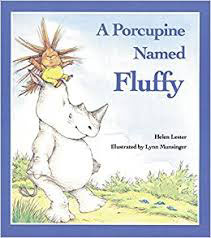 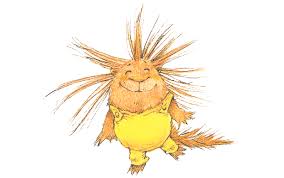 The book opens with Mr. and Mrs. Por­cu­pine tak­ing a stroll with their first child in a stroller. They’re try­ing to find exact­ly the right name for him. They con­sid­er Spike. Too com­mon. Lance? Too fierce for their sweet lit­tle guy. Needleroozer?

It’s Needlerooz­er that gets the kids laugh­ing — it’s almost like a mag­ic word that unlocks something. 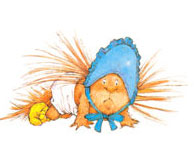 Prick­les? I say. They shake their heads. Pokey? More head shakes. How about Quillian?

“And what is your name?” Fluffy asks, despite his embarrassment. 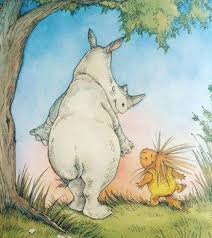 And then we find out the rhino’s name, which I shall not divulge here. Suf­fice to say, it gives the irony of Fluffy’s name a run for its money.

The books ends with the two as fast friends, of course. And the book ends with read­ers — young and old­er — smil­ing and laugh­ing. There’s just some­thing about this book! If you haven’t read it, or don’t remem­ber it (it was pub­lished before I grad­u­at­ed from high school!) look for it in your library. I saw it there just a few weeks ago — it is still very much in circulation.

I’m hooked. I have to know the rhi­no’s name. I’m head­ed to the library.