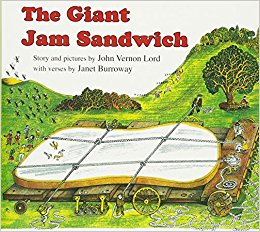 Recent­ly, I was invit­ed to a baby show­er. I love shop­ping for baby show­ers, because I almost always give books and knit a wee lit­tle hat — two of my most favorite things. I had the hat all done except for the top lit­tle curly-cues, but I was fresh out of board books and so went on a hap­py lit­tle jaunt to one of my local bookstores.

And there — BE STILL MY HEART — was a book I’d not thought of in over forty years, but which had so cap­ti­vat­ed my imag­i­na­tion when I was ear­ly-ele­men­tary age that I’ve nev­er for­got­ten it. The Giant Jam Sand­wich, sto­ry and pic­tures by John Ver­non Lord, with vers­es by Janet Bur­roway. I bought it imme­di­ate­ly for the baby. And I bought myself a copy, too.

I nev­er had this book as a child. My mem­o­ry of it is entire­ly a tele­vi­sion expe­ri­ence. We didn’t watch much tele­vi­sion, so I was very curi­ous as to where I might’ve seen it. I’m too old to have watched Read­ing Rain­bow as a child, so I did a lit­tle dig­ging, and found that it was read on Cap­tain Kan­ga­roo in 1977 (we did watch Cap­tain Kan­ga­roo). The book was read, per­haps by the Cap­tain him­self, and the cam­era zoomed in on the pages — very low-tech.

I didn’t read this book to my own kids — it wasn’t repub­lished until 2012 — but you can bet I’ll be read­ing this sto­ry of the four mil­lion wasps that come into Itch­ing Down one hot sum­mer day to any kid who cross­es the thresh­old from now on. Because, I am still utter­ly enthralled with this book! The detailed pic­tures, the effort­less rhyme, May­or Mud­dlenut and Bap the Bak­er….  So great!

I think it was the very idea of cre­at­ing an enor­mous jam sand­wich to trap those four mil­lion wasps that got me. The logis­tics are astound­ing. My moth­er made bread — I knew all about the knead­ing and the ris­ing and the bak­ing and I was floored by the efforts of the cit­i­zens of Itch­ing Down. The bread dough filled an entire ware­house-like struc­ture — the towns­peo­ple had to crawl all over it to knead it. They had to build an oven on a hill….

For hours and hours they let it cook.

It swelled inside till the win­dows shook.

It was pip­ing hot when they took it out,

And the vil­lagers raised a mighty shout.

But the wasps were just as bad as ever…. 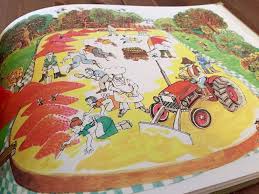 A giant saw is used to slice the loaf, eight fine hors­es pull the slice to the gigan­tic pic­nic cloth set out in a field. A truck dumps the but­ter and the peo­ple use spades and trac­tors to spread it out! Same with the jam!

Six fly­ing machines ‘whirled and wheeled” in the sky wait­ing for the wasps, who came at last lured by the smell of the jam. They dived and struck…and they ate so much that they all got stuck!

Ker­splat! The oth­er slice came down and only three wasps got away. The rest were stuck in that giant jam sandwich….

I thought a lot about this book as a kid. (Rich Inte­ri­or Life, they call this.) The improb­a­ble prob­lem solv­ing, the bak­ing logis­tics, the sheer amounts of but­ter and jam…..  An amaz­ing effort.

[The wasps] nev­er came back to Itch­ing Down,

Which is not a waspish sort of town,

But a very nice place to dance and play,

And that’s what the vil­lagers did that day.

What became of the sand­wich, you ask? Well, you’ll just have to pick up a copy your­self. It’s a pret­ty per­fect pic­ture book, in my opin­ion. And inter­est­ing­ly enough, I count only a cou­ple of kids in the illus­tra­tions…. Fas­ci­nat­ing all the way around!