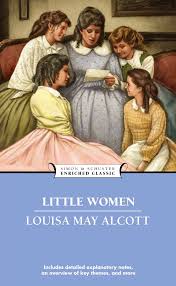 Last sum­mer, we took a trip to Con­cord, Mass­a­chu­setts, a place I’d want­ed to vis­it since I was in high school. I’m a Thore­au fan, you see, and it was a thrill to walk around beau­ti­ful Walden Pond accessed via the very trail (or close to it) Ralph Wal­do Emer­son used to vis­it his friend out in the lit­tle cab­in in the woods. It was also great fun to tour the Alcott house and hear about the fam­i­ly. Dar­ling Daugh­ter was as elat­ed with that part as I was with tramp­ing around Walden Pond. As we moved room to room, she whis­pered sup­ple­men­ta­tion to the (very good) tour guide’s words. Her cheeks were pink, her eyes aglow. She was in her element.

Some­where along the line, I’m sure we’ve watched a cou­ple of movie ver­sions of the famous March family’s adven­tures and tri­als. The PBS series was not that — a movie, that is. It was more like a col­lage we decid­ed — episodes, snap­shots, very short acts—gor­geous­ly pre­sent­ed. It deserves a cin­e­matog­ra­phy award, I think. Stun­ning light and images. We quib­bled hap­pi­ly over whether the char­ac­ter­i­za­tion was just right…or not. We glo­ried in our recog­ni­tion of cer­tain places in the Con­cord area. We ful­ly appre­ci­at­ed the self-reliance footage of the Alcott gar­dens, hen­house, and orchards. And we teared up with Beth’s death, even know­ing it was com­ing, rejoiced at the birth of Meg’s twins, felt all the con­flict­ed emo­tions sur­round­ing Amy’s jour­ney to Europe with Aunt March, root­ed for Jo through­out, and found Lau­rie very hand­some, indeed…. Though we missed the sub­tle­ty of Jo and Laurie’s rela­tion­ship in the book. They rather upped the roman­tic ele­ment in this production.

At times I looked over at my girl, her face aglow by the light of the tele­vi­sion screen. Some­times her eyes were danc­ing, some­times her lips were pursed. She tends to be a purist…and as she said sev­er­al times, “the movie is nev­er as good….” But this was a special…“presentation,” we decid­ed. We won­dered if it would intro­duce a new gen­er­a­tion to a clas­sic, sort of doubt­ing that a pre-tween would find it very interesting.