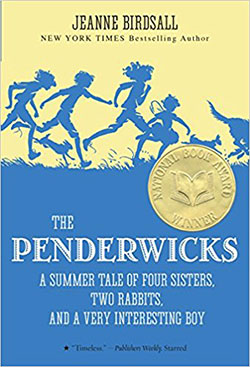 I have a mixed his­to­ry with The Pen­der­wicks books by Jeanne Bird­sall. The first book, The Pen­der­wicks: A Sum­mer Tale Of Four Sis­ters, Two Rab­bits, and a Very Inter­est­ing Boy came out in 2005 when #1 Son was eight and Dar­ling Daugh­ter was three. It won the Nation­al Book Award that year and there was much flur­ry over it.

It’s the sort of book I love — a fam­i­ly sto­ry, gen­tle adven­tures, quo­tid­i­an details — and with a mod­ern set­ting, as opposed to the more dat­ed books that had inspired it like The Melendy Quar­tet, The Mof­fats, and the E. Nes­bit books.

Peo­ple pressed The Pen­der­wicks upon me. “Look at the cov­er!” they said.

It was an adorable cov­er. So we read it.

I must’ve been in a mood or some­thing…. I just didn’t love it. The kids liked it just fine. I was…very crit­i­cal. I won­der now if I was jeal­ous, actu­al­ly. It’s the kind of book I might like to write.

Fast for­ward six years or so…. I was work­ing toward an MFA in writ­ing for chil­dren and young adults. I had to do a crit­i­cal the­sis — a schol­ar­ly work of in-depth analy­sis and crit­i­cism. I decid­ed to write my crit­i­cal the­sis on The Twen­ty-First Cen­tu­ry Hap­py Fam­i­ly Sto­ry. I looked at the his­to­ry of the genre (the “Hap­py Fam­i­ly Sto­ry” was a rec­og­nized genre at one time) and many of the twen­ti­eth cen­tu­ry exam­ples, which were all on my shelves as they are beloved works I’d read as a child and to my children.

After ana­lyz­ing these old­er books I loved so much, I pro­posed cer­tain changes — tweaks, real­ly — that might be need­ed to make the genre appeal to twen­ty-first cen­tu­ry kid read­ers. In that process, I looked at The Pen­der­wicks again. Was it a good mod­el of the twen­ty-first cen­tu­ry hap­py fam­i­ly sto­ry I was propos­ing? Two more books had come out in the series in the mean­time. I read those, too, stub­born­ly hold­ing to my most­ly crab­by stance. Of course these books had their charms, but I picked apart places where I thought they’d fall­en short. I learned a lot doing this. I’d be grate­ful to Ms. Bird­sall if this was all I got from her books.

Mean­while, peo­ple con­tin­ued to press the Pen­der­wicks books upon me. My writ­ing teachers…librarians and book­sellers who know me well…my agent…my agent’s adorable daugh­ter…. “Why don’t you love the Pen­der­wicks?” they’d say. I start­ed to feel like a heel. And I had to admit it didn’t make sense. (This is when I formed the jeal­ousy hypothesis.)

Still, I didn’t pick them up again until just recent­ly. I opened the first book to look at how Bird­sall uses point of view since I was stuck on a POV prob­lem in my own novel…and this time, for what­ev­er rea­son, I fell into the book. I asked my nieces who live just around the cor­ner to read it with me. Their moth­er had just ordered the book for them — it being exact­ly the sort of book they would love. (It’s genet­ic, this love of hap­py fam­i­ly sto­ries.) And they did love that first Pen­der­wicks book — we read the first chap­ters togeth­er this sum­mer and they fin­ished on their own, unable to wait for me. 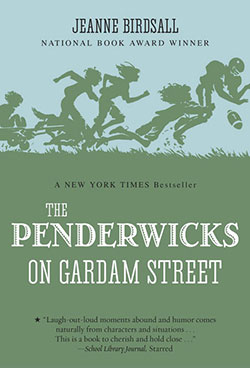 Last week, while my sis­ter and broth­er-in-law were out, I had a chance to do one of my favorite things: sit on the floor in the hall­way between my nieces’ bed­rooms and read them to sleep. Only they couldn’t go to sleep. We are now on the sec­ond book in the series, The Pen­der­wicks on Gar­dam Street, and it was entire­ly too absorb­ing to put any­one to sleep. I even­tu­al­ly had to say, “It’s late. We real­ly need to be done for now….”

Today after school they came over for anoth­er cou­ple of chap­ters. Who knows how these things hap­pen, but I’m in love with the Pen­der­wicks at last! The fifth book came out this fall. We’re plan­ning on read­ing the whole series together.