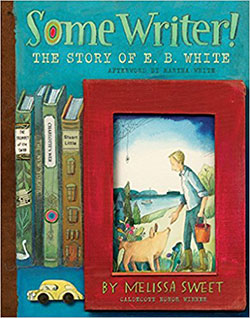 I had the won­der­ful good for­tune of hear­ing Melis­sa Sweet talk about her work last week. It was a fas­ci­nat­ing pre­sen­ta­tion about her process, her research, her art. I left inspired, and with a han­ker­ing to find scis­sors and a glue stick and do some col­lage myself. (Let’s be clear, things would not turn out at all like Sweet’s gor­geous works of art….)

I’ve been car­ry­ing around her book, Some Writer! The Sto­ry of E. B. White, in my purse ever since. It’s signed now, which gives me an extra “zing” of joy every time I pull it out. I’ve read it sev­er­al times. I’m to the point now, as I’ve been with Charlotte’s Web since I was a child, that I just open it wher­ev­er and start reading.

Which is what I did in one of the drea­ri­est wait­ing rooms known to human­i­ty a few days ago. Before I’d fin­ished read­ing the quote that begins chap­ter five, the whin­ing child across from me stopped pes­ter­ing his moth­er for two sec­onds and called out to me.

“Hey! Is that a kid book or an adult book?” His tone was challenging.

“Well, tech­ni­cal­ly, it’s a biog­ra­phy writ­ten for kids — ” I said, and before I could add that any­one could read and enjoy it he interrupted.

“Then why are you read­ing it?”

“Do you read oth­er kids’ books?” he demand­ed. His moth­er tried to hush him.

“They often tell the best sto­ries,” I said as his moth­er tried to shush him again.

And then I took a chance.… “Would you like to look at it with me?” I asked.

I didn’t know what else to say. I wasn’t going to bur­den this grumpy wait­ing child with any didac­ti­cisms about how impor­tant and joy­ful read­ing is, and how per­haps he might not have found the right book yet etc. So I went back to reading.

But the ques­tions continued.

“Is that a man or a teenag­er pet­ting that pig?” he asked squint­ing at the cov­er from where his Mom held him to his chair. So I told him it was E.B. White — point­ing to White’s name — as a young man, and before I could tell him who E.B. White was he said, “That’s not a name — E.B.! Those are just…letters. What’s his real name?”

He laughed uproar­i­ous­ly. I went back to read­ing. But it wasn’t long before he man­aged to cross the wait­ing room aisle and sit beside me, all non­cha­lant-like. I opened the book wider, rest­ed it on my right leg, clos­er to him, and start­ed a game of I‑Spy.

“I spy a ruler,” I said. He found it imme­di­ate­ly. He also found the birch­bark canoe and the small box of paper­clips. Sweet’s col­laged illus­tra­tions are packed with var­i­ous and sundry things.

He spied a mouse. I told him about Stu­art Lit­tle. We turned the page. I read him the let­ter White wrote to his edi­tor Ursu­la Nord­strom. He com­ment­ed that “E.B.’s” writ­ing wasn’t very neat and con­fessed his wasn’t either. We laughed about eat­ing 100,000 stalks of cel­ery and 100,000 olives, which is what White sug­gest­ed as a cel­e­bra­tion for the 100,000 copies of Stu­art Lit­tle that had sold — and which my young friend declared “nasty.” So we thought of bet­ter things to eat in cel­e­bra­tion and agreed that 100,000 of most any­thing was too much.

We con­tin­ued look­ing through the book. I didn’t read it to him so much as we enjoyed the illus­tra­tions togeth­er. He loved the rough sketch­es of Char­lotte done by Garth Williams. I told him a lit­tle about Melis­sa Sweet and her art stu­dio. He declared this infor­ma­tion “cool,” so I was glad I had it.

Even­tu­al­ly, the boy and his moth­er were called in, and then I was, too. When I came back out, the wait­ing room was empty.

I think there’s a decent chance my young friend will check into Stu­art Lit­tle if he remem­bers the title. I’m sure he’ll remem­ber that the author’s first name was “E.B.”, and any librar­i­an or book­seller worth her or his salt should be able to help him out.

What a won­der­ful sto­ry, Melanie! Kudos to you for know­ing how to offer this child the chance to expe­ri­ence this book, with­out try­ing to force it onto him. Who knows how you may have changed his atti­tude about books. What a lucky encounter…for you both!

Very lucky for me! I can only hope, for him! Thanks, David!

Won­der­ful sto­ry!! Good books are like can­dy (or like pret­zels if you’re from the Philly area) – they are irre­sistible. Thanks for shar­ing this.

Like pret­zels! (With some choco­late, maybe?) So fun – thanks, Jen!

Oh, I love know­ing you are out there, in won­der­ful book­stores as well as drea­ry wait­ing rooms, mak­ing mag­ic with chil­dren and books!