Phyl­lis: Two sticks and some string. That’s the most basic def­i­n­i­tion of knit­ting. The sticks might be met­al or wood. The string might be yarn or flax. But in the hands of a knit­ter, even an unskilled one such as I, they become magic.

In the chilly months, we bun­dle up in cozy sweaters, snug mit­tens, hats that hug our heads. And what’s bet­ter than a book on a cold day or night to help keep us warm, snug­gled up with a lit­tle lis­ten­er or read­er or even a cozy cat? This month we’re look­ing at a few of the pic­ture books that cel­e­brate knit­ting and yarn. 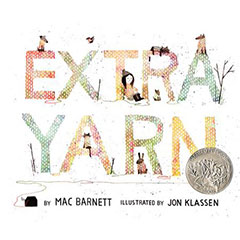 In Extra Yarn by Mac Bar­nett, illus­trat­ed by Jon Klassen (Balz­er and Bray, 2012), a lit­tle girl in a cold, drab town finds a box filled with yarn of every col­or. She knits her­self a col­or­ful sweater and still has extra yarn, so she knits her dog a sweater. But she still has extra yarn. She knits a sweater for a boy Nate (who laughs at her sweater but is real­ly just jeal­ous) and one for his dog, and so it goes. She knits sweaters for her whole class, includ­ing her teacher, for her par­ents, her neigh­bors (except for Mr. Crab­tree who nev­er wears sweaters, who get a knit­ted hat), sweaters for dogs, cats, birds and “things that didn’t even wear sweaters” — hous­es, mail­box­es, bird­hous­es. And still she has extra yarn. When an arch­duke hears of the mag­i­cal box of yarn and demands to buy it for ten mil­lion dol­lars, Annabelle, who is knit­ting a sweater for a pick­up truck, polite­ly declines. The arch­duke hires rob­bers who steal the box for him, but when he opens the box it is emp­ty. He flings it out the win­dow along with a curse, “Lit­tle girl…you will nev­er be hap­py again!” The box floats back across the ocean straight to Annabelle, who finds it full of extra yarn and who is indeed hap­py as she con­tin­ues to knit a more col­or­ful world. I love how her gen­eros­i­ty makes her world warmer in more ways than one.

Jack­ie: I love this book, too! I love that knit­ting stands for love, and, as you say, her knit objects bring col­or to the town, as love is the col­or in our lives. I also love the pair­ing of the mun­dane — knit­ting — with the mag­i­cal, the unend­ing sup­ply of yarn. 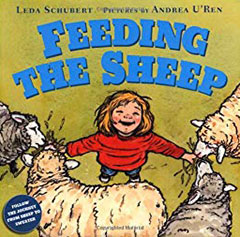 Phyl­lis: Feed­ing the Sheep by Leda Schu­bert, illus­trat­ed by Andrea U’Ren (Far­rar, Straus & Giroux, 2010) begins with a lit­tle girl ask­ing her moth­er “What are you doing?” “Feed­ing the sheep,” the moth­er replies. This struc­ture of ques­tion, answer, and rhyming cou­plets con­tin­ues through shear­ing the sheep, wash­ing the wool, card­ing the wool, until final­ly the moth­er has knit a gor­geous blue sweater for her daugh­ter. At the end of the book the moth­er asks, “What are you doing?” and this time the lit­tle girl replies, “Feed­ing the sheep.” Each stan­za ends with a rhyming line: “Snowy day, corn and hay,” “Soft and deep, sheepy heap.” Such fun to say.

Feed­ing the Sheep has the ele­gant sim­plic­i­ty of beau­ti­ful lan­guage, rep­e­ti­tion, rhyming cou­plets, and an end­ing that echoes the begin­ning and res­onates with love between a moth­er and her daugh­ter through the every­day activ­i­ties of their lives. I love this spare and ten­der sto­ry more every time I read it.

Jack­ie: This ten­der sto­ry makes me want to have a sheep, or even bet­ter, be a part of this lov­ing fam­i­ly. Andrea U’Ren’s illus­tra­tions extend the sto­ry. The girl is doing some­thing in each spread that res­onates with what the mom is doing. When Mom is shear­ing the sheep, the girl is play­ing with the fleece. When the Mom is wash­ing the wool, the girl is wash­ing the dog, Mom card­ing the wool, girl brush­ing the dog.

And at the end, we have the love­ly twist. The girl the one feed­ing the sheep. The love is passed on. 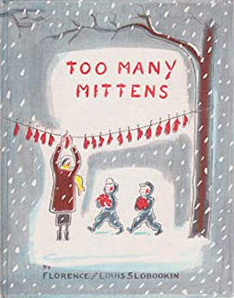 Phyl­lis: Too Many Mit­tens by Flo­rence and Louis Slo­bod­kin (Ran­dom House Children’s Books, 1958) was writ­ten at a time when pic­ture books often had many more words than today (and when most ser­vice peo­ple were men). When Don­nie los­es a red mit­ten while Grand­ma is stay­ing with him and his twin Ned while their par­ents are trav­el­ling, word about the lost mit­ten goes around the neigh­bor­hood. Neigh­bor after neigh­bor help­ful­ly bring over red mit­tens they have found. “Is this yours?” they ask, and Grand­ma replies, “I guess so,” stash­ing the mit­tens in a draw­er. When Don­nie and Ned’s par­ents return from their trip with a present for the boys — red mit­tens — Grand­ma opens the mit­ten draw­er, which explodes with red mit­tens. Ned’s solu­tion: hang the red mit­tens on a clothes­line out­side and post a sign for peo­ple to claim them, which they do, all but one. The neigh­bor­hood likes the mit­ten solu­tion so much that each win­ter the fam­i­ly strings a mit­ten clothes­line for lost red mit­tens to be reclaimed. Any­one who finds a red mit­ten any­where brings the mit­ten over to the twins’ house to hang on the clothes­line. Who knows? You might find your lost red mit­ten there! The mit­tens them­selves are vivid spots in the art.

Jack­ie: The art in this book is so won­der­ful. I love the red mit­tens appear­ing on the pages. They remind me of the joy of car­di­nals in win­ter. And I enjoy the neigh­bor­hood feel­ing of this sto­ry. A sign of how much we have changed since 1958 is that I miss the women who might car­ry mail, or deliv­er pack­ages, or pick up garbage. But we can add them in as we read and talk about this story. 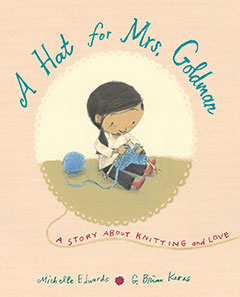 Jack­ie: This is such a rich sto­ry, rich in emo­tion, rich in cre­ative solu­tions, rich in vocab­u­lary. I am glad to learn “kep­pie,” and that a good deed is a “mitz­vah.” And I am so glad for the instruc­tions that Michelle Edwards includ­ed in the book, so we can all make hats to keep the kep­pies of our loved ones warm.

And so, skills, and love, are passed down to new knit­ters. Knit one, purl two. A hat a scarf a sweater, pom-poms — what two sticks and some yarn are real­ly knit­ting is love. And that’s a mitzvah.

These are won­der­ful books! Anoth­er yarny tale is KNIT YOUR BIT by the incom­pa­ra­ble Deb­o­rah Hop­kin­son. Bonus points for boy knit­ters, based on the WWI Cen­tral Park Knit-In.

I love to knit when I am not read­ing MG fic­tion, main­ly mys­ter­ies. Ladies, you own books are some favorites I used when I was a SLMP in MD. Thank you for shar­ing a book by the Slo­bod­kins. After Louis’s famous “Caps for Sale,” I am always want­i­ng anoth­er of his evoca­tive stories.