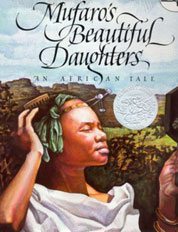 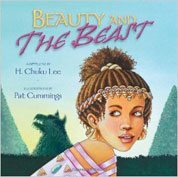 What a plea­sure to read your com­ments on these two books. You make me want to run to the library to read them and to enjoy the illus­tra­tions. Thank you.
Phyl­lis, BIG MOMMA MAKES THE WORLD is one of my favorite books. And I’m glad to hear that you are still writ­ing and win­ning awards.
Nor­ma Gaffron

And what a plea­sure to hear from you, Nor­ma. Yes, read them and enjoy them. And I hope you are still telling your won­der­ful stories.

Thank you for bring­ing back John Step­toe’s work. His ear­ly death was a tragedy for chil­dren’s books as well as for his fam­i­ly and friends. When my own kids were young, Step­toe’s pic­ture book about his chil­dren was a favorite in our house. I can no longer find it online and it wore out from many read­ings, but I think it was called Bweel­la and Jaba­ka (and I’m sure that I’m spelling it wrong). I remem­ber being stunned when I real­ized how young he was when he wrote it.

“Mufaro’s Beau­ti­ful Daugh­ters” was a rev­e­la­tion to my fam­i­ly. I remem­ber one of the girls com­ing home so excit­ed about it, after her school librar­i­an read it. Sad to say, at that time our house had very few books of folk­tales, almost none with char­ac­ters of col­or. That changed very quick­ly. Thanks for this love­ly, thought­ful tribute.