How Tom Beat Captain Najork and His Hired Sportsmen 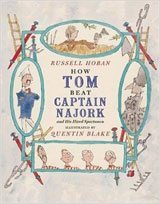 I have writ­ten before about the need for longer pic­ture books in addi­tion to the short­er ones mak­ing up the cur­rent trend in pic­ture book pub­lish­ing. I want to stay on the record as say­ing there’s plen­ty of rea­son to keep pub­lish­ing pic­ture books that are longer than 300 – 500 words. I’m an advo­cate for 3000 – 5000 words — a sto­ry with details! And to those who think kids won’t sit for them — HA! Try it. If the sto­ry is good, they’ll listen.

One of my favorite longer pic­ture books is How Tom Beat Cap­tain Najork And His Hired Sports­men, writ­ten by Rus­sell Hoban and illus­trat­ed by Quentin Blake. I did not count the words, but this is a sto­ry filled with long sen­tences, won­der­ful descrip­tion, and very fun­ny char­ac­ters. There’s not an extra word in there, in my opin­ion, and the sto­ry could not be told in 300 – 500 words.

The book opens intro­duc­ing Tom’s maid­en aunt, Aunt Fid­get Wonkham-Strong, who wears an iron hat and take “no non­sense from any­one.” Where she walks, the flow­ers droop. When she sings (which is hard to imag­ine), the trees shiver.

This open­ing descrip­tion and the accom­pa­ny­ing pic­ture can hook a room­ful of kids. When you turn the page and read about Tom, Aunt Fid­get Wonkham-Strong’s nephew, who likes to “fool around” the kid lis­ten­ers are sold — they will sit for the sev­er­al hun­dreds of words (many of them sophis­ti­cat­ed words) it takes to tell the story.

Tom fools around with sticks and stones and crum­pled paper and most any­thing else he can get his hands on. He’s gift­ed in the mud depart­ment and can make things from bent nails, cig­ar bands, and a cou­ple of paper clips. He’s a boy Mac­Gyver. And when his foe comes along, he is more than ready.

Who is his foe, you ask? Cap­tain Najork. And it’s Aunt Fid­get Wonkham-Strong who sets up the match. She sends for Cap­tain Najork and his hired sports­men to teach Tom a les­son about fool­ing around.

Well, when Cap­tain Najork arrives on his ped­al boat to reform Tom, Tom sees right away that he’s only six feet tall and his eyes are not like fire, nor is his voice like thun­der. They size each oth­er up, and the games begin. Cap­tain Najork announces that they shall com­pete at womble, muck, and sneedball.

“How do you play womble?” said Tom. 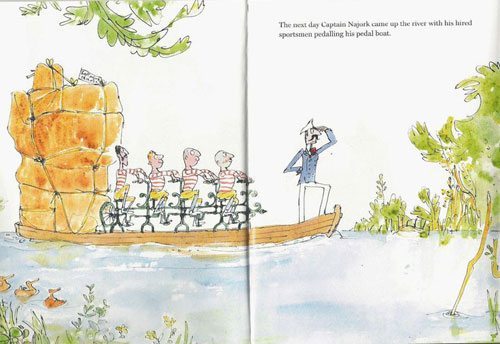 And so they do. The pic­tures are hys­ter­i­cal and the descrip­tions of the games— which aren’t real­ly descrip­tions at all, but make you think you already know the fin­er points of womble, muck, and sneed­ball — are delightful.

Spoil­er Alert: All of Tom’s fool­ing around turns out to have been most excel­lent train­ing for trounc­ing Cap­tain Najork and his ridicu­lous hired sports­men. But I won’t tell you the wager Tom makes with the Cap­tain or how that turns out for all involved. For that, you will have to find the book, which is not easy to find and which is expen­sive (though absolute­ly worth it) to make one’s own. Do look for it! It is out there, as is an under­ground crowd of extreme fans.

I had a writ­ing teacher who read this book to me, and so I hear it in her voice, a respectable lilt­ing British accent full of excel­lent dra­ma and good fun. (She can do a for­mi­da­ble Aunt Fid­get Wonkham-Strong!) I can’t quite pull off the accent, but I’ve nev­er found a kid who mind­ed. I once read this sto­ry in a Back-to-School Sto­ry­time along with a Skip­pyjon Jones book. It was an evening of hilar­i­ty and fun. And at the end, I had a request from two kids not old enough to start school yet to read it again. Which I did. To a room­ful of peo­ple who quick­ly gath­ered. THAT’S a good book. A most excel­lent longer pic­ture book.

P.S. Rus­sell Hoban and Quentin Blake are an inspired match — they’ve col­lab­o­rat­ed on sev­er­al books. For a treat, lis­ten to Blake talk about his fond­ness for this sto­ry and its characters.

Oh, Melanie! If only you were an edi­tor! It does­n’t seem like there are many edi­tors out there will­ing to take a chance on longer pic­ture books. Such a shame.

Oh I know, David. Hence, my tire­less cam­paign. 😉 Wait­ing for the pen­du­lum to swing again.….