Lynne Jonell: Justice in Another World 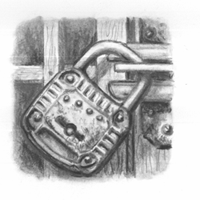 I just met a woman who lived through hor­ri­fy­ing emo­tion­al abuse as a child.

I had been told about her his­to­ry some years before; but when I met the woman, we didn’t men­tion it. We talked instead about books, a sub­ject of com­mon inter­est, and teach­ing, her passion.

I made an effort to for­get what I knew about her past; it was awful enough for her to have lived through it with­out my think­ing about it while we talked, like a bystander at a crime scene who keeps cast­ing sur­rep­ti­tious glances at the pool­ing blood beneath a blan­ket-cov­ered mound.

But I couldn’t keep my thoughts entire­ly dis­ci­plined. Most­ly, I was in awe — that she had sur­vived, that she had become a kind per­son, a con­tribut­ing mem­ber of soci­ety with a gen­er­ous heart. And now, days lat­er, I am still think­ing about — let’s call her “Jean.”

I know there are evil things done in this world, but for the most part they are things that one reads about in papers, or hears on the news. To sit across from some­one who lived through what Jean had was some­thing more real, and in the days fol­low­ing our lunch date I went back to it over and over again, try­ing each time to make sense of her sto­ry somehow.

I sup­pose it will end up being worked out in a book. It’s hap­pened before. There are peo­ple in my life I have tried to com­pre­hend, and events and themes that have con­cerned me deeply. I have wor­ried them all like a dog might a bone until they took shape as char­ac­ters and plot points, and then I wrote them down.

In my book Emmy & the Incred­i­ble Shrink­ing Rat, where did Miss Barmy, the world’s most evil nan­ny, come from? I know, but I’m not telling. Why does the man in her life keep going back to her in spite of every­thing? That is some­thing that mys­ti­fies me as well and I try to make sense of it on the page. 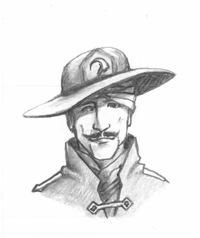 In my newest book, The Sign of the Cat, the Earl of Mer­rick is the hero of the nation, uni­ver­sal­ly admired and hon­ored — but this front hides a dan­ger­ous crim­i­nal (and he’s mean to kit­tens, too.) Where did this vil­lain come from? I didn’t know while I was writ­ing the sto­ry, but I am begin­ning to under­stand now.

Why is it so impor­tant to write about vil­lains? Why not just write about good peo­ple, and good choices? 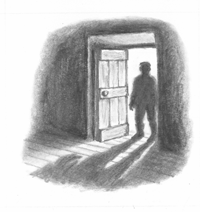 Because evil does exist in this world, and chil­dren know it. They may not know it in all its hor­ror, but they get the con­cept; and they’re afraid of the dark. And they pas­sion­ate­ly want justice.

I want jus­tice, too. And I want to tell the truth. So I write fantasy.

Fan­ta­sy is a time-hon­ored method of speak­ing truth when truth is too dif­fi­cult to face straight on. I can write about child aban­don­ment, abduc­tion, and mur­der, and if I include talk­ing cats, it’s con­sid­ered per­fect­ly suit­able for chil­dren. Fan­ta­sy soft­ens the sharp edges, 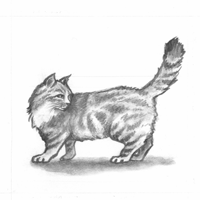 dis­tances the real­i­ty, so that it becomes pos­si­ble to look at deep truths and deep fears with­out being overwhelmed.

Fan­ta­sy has anoth­er pur­pose, too. It can car­ry read­ers far, far away from the cir­cum­stances of their lives. It can take a lone­ly and abused child, like Jean, to anoth­er world entire­ly; a world where such a child has a chance, and a voice; a world where evil is unequiv­o­cal and called by its name. 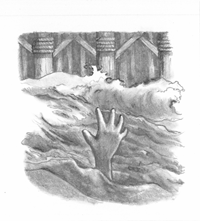 Being told from birth that you are less than every­one else takes its toll. Being told you are worth­less can make you feel as if you are drown­ing in a sea of rejec­tion and pain.  But for a few hours in time, as long as it takes to read a book, such a child can for­get; such a child can iden­ti­fy with a char­ac­ter, can put on courage, can hope for a hap­py ending.

Jean loved books as a child. I like to think that the books she read helped her make it through. And there are many chil­dren like Jean, right now, today, caught in sit­u­a­tions they feel pow­er­less to change. I want to give them what I can: a world where jus­tice comes at last, be the bat­tle ever so unequal.

Illus­tra­tions by Lynne Jonell, from The Sign of the Cat

Lynne Jonell is the author (and occasional illustrator) of seventeen books for children, all with an element of fantasy. Her first novel, Emmy and the Incredible Shrinking Rat, won the Minnesota Book Award; her latest book, Time Sight, is a historical time-travel set at Castle Menzies in Scotland, the castle of her grandfather’s clan. Her books have received starred reviews in The Horn Book, Kirkus Reviews, School Library Journal, Publishers Weekly, and Booklist, and have been published in nine languages. She lives in Plymouth, Minnesota, with her husband. For more information please visit her website.